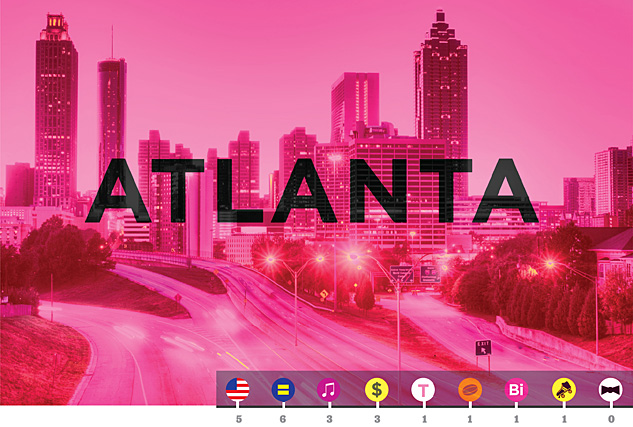 There are lots of ways to calculate and accurately determine that Atlanta is indeed among the Gayest Cities in America. But for the fourth year in a row, the Advocate proves it has no idea what methods those might be. In its annual effort to put places you’d never think about visiting onto the gay map, the magazine once again comes up with a random list of qualifiers, assigns random points for each one a city can claim, and then multiplies it by the population. We decided we’d take it, with reservations about the methodology, when Atlanta ranked No. 1 in 2010. But we got a little pissier when our town fell to No. 7 in 2011 and fell again to No. 9 in 2012. Now as then, the Advocate can't keep its facts straight about our city or get the math right in its own convoluted system. New York, Los Angeles and San Francisco don’t make the cut at all this year. So congratulations, Tacoma! You’re the No. 1 Gayest City in America for 2013! You get 5 points for marriage equality in your state and a point each for having at least one Whole Foods, West Elm or Pottery Barn store. Other qualifiers for gayest cities this year include check boxes for each gay rugby team (Go, Bucks! But no points for you Harlequins), roller derby squads, and how many times since 2009 Scissor Sisters, Uh Huh Her, Girl in a Coma or the cast of “Glee” performed there. Factors that at least make some sense on this year’s list include the number of openly gay elected officials, local jurisdictions with transgender protections, bisexual resource groups, and HRC Equality Index – the corporate one that Atlanta companies are faltering on, not the municipal one that metro Atlanta failed miserably. But forget the weird science. If the Advocate is going to be random in its criteria, it could at least be accurate in its facts and math. For the fourth year in a row, it’s not. Maybe they got our message last year and tried to avoid writing much so Atlanta’s sparse No. 9 listing for 2013 doesn’t get as much wrong. True, we do have “clothes, clubs, cuties, concerts — and yes, some housewives too,” as the listing states. What city doesn’t? The Advocate hails our hot gayboroods like Ansley Park. Yeah. And “nearby Decatur for the ladies.” OK. And even though the annual list states upfront and on every page that if you’re looking for nightlife you’re looking at the wrong list, it mentions clubs twice when talking about Atlanta and its biggest high five for “the star of the South” names two gay bars. Congratulations, My Sister’s Room and Swinging Richards. Sorry to y’all at more than three-dozen others. We’re not talking about clubs this year. Are we? Anyway, hooray for Atlanta’s name once again hitting a national LGBT list. Like this one, that one, the other one, and oh yeah this one too. Oh well. We agree with the Advocate's conclusion if not its reasoning. If the national attention does entice anyone to visit, we’ll make sure tourists experience the real reasons we’re so gay once they get here. After all, our readers know what makes for the Bestest of the Best of Gay Atlanta. The full list: 15. St. Louis 14. Salem, Ore. 13. Colorado Springs 12. Providence, R.I. 11. Oakland 10. Minneapolis-St. Paul 9. Atlanta 8. Madison 7. Eugene, Ore. 6. Salt Lake City 5. Seattle 4. Washington, D.C. 3. Spokane 2. Springfield, Mass. 1. Tacoma Graphic via the Advocate