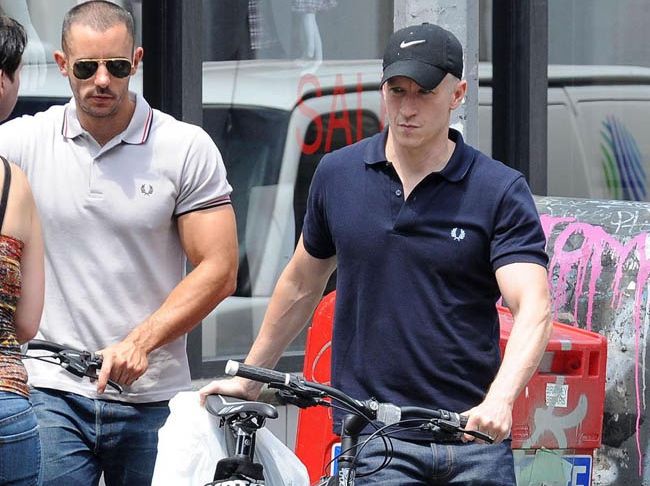 When you’re gay news hunk Anderson Cooper and your primetime show is dragging down CNN’s ratings, what do you do? Bunk up with your muscular man friend in a $3,200-per-night hotel in India.

The former part-time Atlantan is spending part of the month consoling himself with New York gay bar owner Benjamin Maisani, who bicep for bicep gives Cooper’s new gym sculpted bod a run for its money.

We shared pics of Maisani and Cooper biking together in July, one more piece of evidence that Cooper is, indeed, a big mo. His heavy dose of gym time and love of gay-fav NeNe Leakes from “The Real Housewives of Atlanta” just fueled the homo rumors that Cooper never really swats down.

But then the gossipy Page Six offered this:

Anderson Cooper has been consoling himself over falling ratings by living it up in Jaipur, India, at one of the world’s most opulent hotels. The CNN star was spotted Tuesday with his muscular friend, Benjamin Maisani, an owner of East Village bar Eastern Bloc, at the Rambagh Palace, named the best hotel in the world by Conde Nast Traveler. Cooper’s $3,200-a-night room features a four-poster mahogany bed and views of the gardens of the former Maharaja palace. Our source said, “Anderson’s room has a large round bathtub. On the first night it was filled with bubbles and sprinkled with red rose petals.” CNN declined to comment.

Not too long ago, Cooper was hailed as the savior of CNN. But now, his show can’t even beat reruns from rivals Fox and MSNBC. Even his recent on-air three-way with gays Corey Johnson and Dan Savage didn’t help. Though the “60 Minutes” piece where he got topped by Michael Phelps was an entertaining view.

Perhaps most alarming for CNN was the performance of Anderson Cooper, who has become the signature host for the network in prime time. Mr. Cooper, who as recently as 2008 was a ratings leader at 10 p.m., finished fourth and last at 10 p.m. in October. He trailed not only the leader, Greta Van Susteren, on Fox, but Keith Olbermann on MSNBC and Ms. Grace on HLN, despite the fact that both those shows were repeats of programs that had been broadcast at 8 p.m.

In an interview in March, Jon Klein, the president of CNN’s domestic networks, said that Mr. Cooper’s program was an hour “where we could win.”

So, enjoy your lavish room and big round bathtub, Coop. Oh, yeah, that stud of a man friend, too. You deserve the break and your lackluster ratings will be there when you return.

Just know that like those snarky bloggers at Gawker, we’re more convinced than ever that you’re a giant homosexual and everyone knows it.