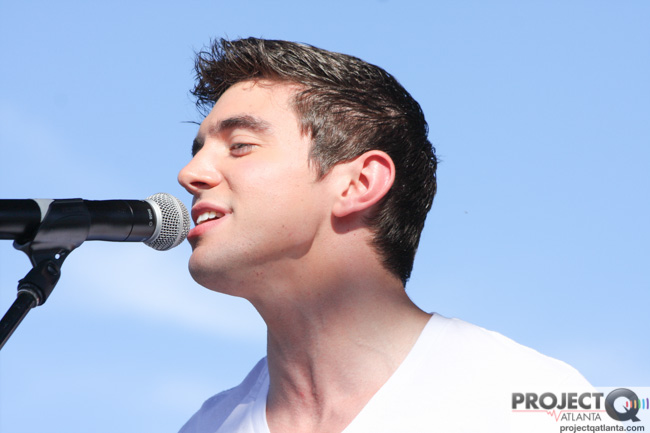 Fans can’t get enough of sexy gay crooner and Atlanta Pride alum Steve Grand. Soon, they won’t have to wait for more. With a crowdfunding campaign tripling his initial budget, “All-American Boy: The Album” is on its way.

Few would-be gay icons have shown the staying power of this little internet sensation who could. Earlier this month, the former physique model-turned-Andy Cohen drink slinger-turned-singer-turned-Atlanta Pride heartthrob asked for $81,000 from Kickstarter donors interested in getting a taste of him in EP form. They delivered, three times.

In fact, that original goal was surpassed in less than a day. As of Thursday, donations to Grand’s upcoming album topped $271,000. By Sunday March 30, he could quadruple his initial ask and have plenty of money to market the record and maybe even gold-plate a few CDs for top contributors. That’s what talent, tenacity, and OK some abs and a killer booty with a nude modeling past, can do in the gay world.

But Grand is more than a hot commodity. Grand is the leader of a movement, he says.

“It’s not just about the album, it’s a movement,” he says of the impressive response to his crowdfunding effort. “I think a small pocket of people feel like I’m helping the voice [of LGBT people] be heard, and they’re making a statement by supporting the record.”

So if Steve Grand is your spokesperson and you want to help finish him off – and you so do you dirty dog – watch his video pitch above and visit his Kickstarter page. Then lay back and prepare to recieve the album in all its Grand glory. His shirtless Pride anthem and the song that started it all are guaranteed to be on it.