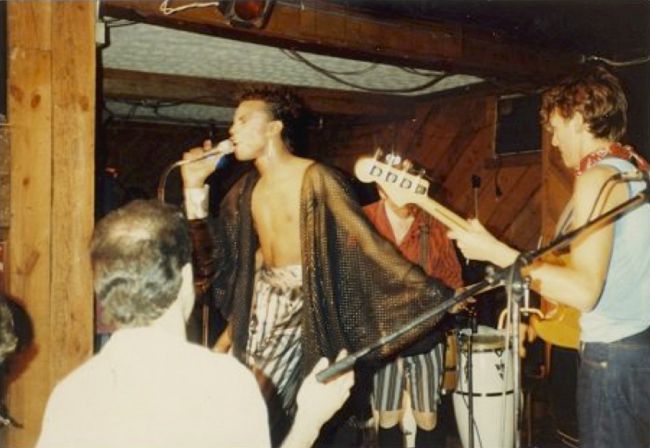 Everybody knows ‘90s RuPaul and the “Drag Race” one we can’t wait to see return. You may even know that bit of ‘80s RuPaul who worked a B52s video. Now footage from a long lost club and cable show reveals the queen, and the gay Atlanta, where it all began.

Just glimpses are still visible of gay haunts that existed when Midtown was Ru’s stomping grounds in 1983. When we’re not looking even further at pre-gay Atlanta, we’re looking at the present-day Atlanta Eagle unaware that it was the same corner where the Celebrity Club once Punked, Dragged and New Waved the gays and ghouls until the wee hours.

At the same time, a club called the Nitery hosted RuPaul and the Wee Wee Pole band. Even then, the 23-year-old Ru (photo, left) showed early signs of a star (today, right) in the making in the video interview and performance below. The clip comes from a now defunct public access show called “The American Music Show.” It was first dug up by Dangerous Minds.

Even before he had given himself much of a makeover, RuPaul was quite the event in the queer New Wave/Punk scene of Atlanta. The interviewer, James Bond, is from “The American Music Show,” a LOOONG running, legendary super-weird program that’s just too brilliant for anything other than cable access. Ask anyone halfway cool from Atlanta about it, they will know about “The American Music Show,” trust me. But then, RuPaul has always held in the weird and novel in very high esteem.

We’re just thankful for something to keep our Ru-minds busy while we sit in Ru-ticipation to see if the Ru-mors are true that Atlanta’s own Violet Chachki will grace Season 7 of “Drag Race.” The runaway Logo hit is expected to air its Season 7 premiere in February 2015.

The following year after the Wee Wee Pole performance, Ru was working the hometown crowd again, this time as the lead singer of RuPaul and the U-Hauls. Check out both videos below.