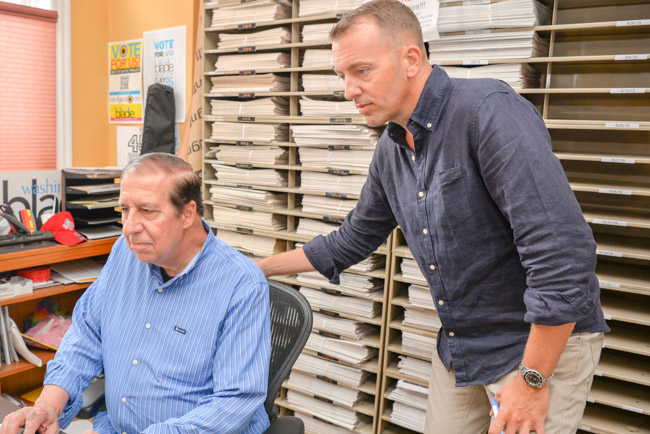 The Washington Blade marks 50 years of LGBTQ reporting this year with special anniversary coverage, panel discussions, a digital archiving project and a gala celebration on Friday in Washington, D.C.

But the nation’s longest-running LGBTQ publication barely made it through its 40th year. Parent company Window Media declared bankruptcy in 2009, causing the Blade and several other LGBTQ publications across the country to close. That included Atlanta-based publications Southern Voice and David. Assets of the company were sold to several buyers in bankruptcy court in 2010.

The Blade’s closing hit its staff hard, including Kevin Naff, who had been editor since 2002.

“The bankruptcy happened on a Monday and I went to bed thinking I was done with the Blade,” he told Project Q Atlanta. “I woke up Tuesday morning to 400 emails of support. People around the world, developers offering office space, college kids offering to distribute the paper for free.”

The Blade’s staffers launched a new paper called the D.C. Agenda, and in 2010 bought the rights to the paper’s original name and relaunched it with their new company Brown Naff Pitts Omnimedia. The company is owned by Naff, who serves as editor, publisher Lynne Brown and former advertising executive Brian Pitts.

They couldn’t have done it without a number of donations that poured in from around the world, according to Naff (photo right, with reporter Lou Chibbaro Jr.).

“Truly, it’s a community effort,” he said. “I don’t think the Blade would exist today if it hadn’t been for that outpouring of support from the community.”

The need for LGBTQ media remains as strong as ever, due in part to President Trump’s dismantling of LGBTQ rights, according to Naff.

“During the 2016 [presidential] campaign, I had a lot of people say, ‘Why do we need the gay press anymore? Obama gave us everything and Hillary’s coming to cement everything.’ And no one’s really saying that anymore,” he said.

“What I’ve seen since the election is a renewed appreciation for what we do,” he added.

Photo by Michael Key for the Washington Blade