Was that Lady Gaga at Sister Louisa’s Church? 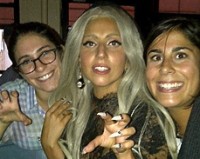 If you were hanging out at the gay-owned alterna-queer lounge in the Old Fourth Ward on Monday, you were in for a shock. None other than Lady Gaga herself reportedly waltzed into Sister Louisa’s Church of the Living Room & Ping Pong Emporium. Where else in Atlanta would you expect to find the Mother Monster playing a round of double-fisted ping-pong and stretching out on the “Blood-of-Christ Red Sofa” with friends, says Church owner Grant Henry, aka Atlanta artist Sister Louisa. “I think Church is going to become that place where peeps from out of town come to see how fucked up the South is,” Henry laughs. Just days after asking President Obama about bullying and singing a tribute to suicide victim Jamey Rodemeyer at the iHeart Radio Festival, Gaga (photo, not from Church) apparently was hanging out with the ATL in-crowd after a hard day of photo shoots. She did slip that her entourage might take in Tuesday’s Braves game. At least this time, gay fans didn't have to trek to Gwinnett to see her. Henry says the Pawed One asked to buy a round ceramic Virgin Mary medallion that holds court behind the bar as part of the nightspot’s themed decor, but Henry had to decline. “I told her that Jesus would be motherless,” Henry said, indicating the matching Jesus on the other side of the liquor. What? Gaga and no photos from the actual sighting? Well, Henry directed his staff not to take any, but he says other ping-pongers did snap some. Were you one of the lucky ones who got an eyeful of Gaga and snapped a pic? {encode="[email protected]" title="E-mail us."}