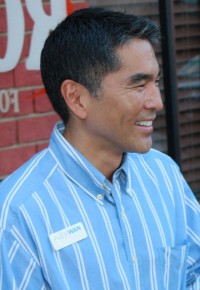 Alex Wan outpaced his five opponents for the second consecutive quarter for the District 6 post on the Atlanta City Council, leaving him with a distinct cash advantage in the closing weeks of the campaign.

Wan is one of three gay men and six overall candidates hoping to replace Anne Fauver in District 6, which includes a large swath of Midtown and other heavily-gay neighborhoods. His campaign raised $32,070 from July 1 to Sept. 30, leaving him with $45,824.11 cash on hand.

Those amounts topped the diverse field of candidates when factoring out the personal loans made to the campaigns of Bahareh Azizi and Liz Coyle. Wan clearly outpaced the other two gay candidates in the race — Miguel Gallegos and Steve Brodie, who lost to Fauver by a handful of votes in 2005.

Azizi raised the most at $49,867, though that total included a $20,000 loan to the campaign, according to financial disclosure statements. Coyle loaned her campaign $7,196.97, boosting her contributions to $24,467.97 in the third quarter. Regardless of the loans, Wan sits on the largest war chest for the last month of the campaign.

Tad Christian raised an estimated $25,000 with no personal loans to the campaign, putting him second only to Wan in the amount raised.

A look at how much money each candidate raised between July 1 and Sept. 30: