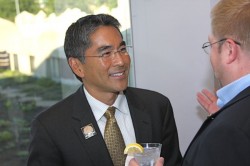 Alex Wan, the coupon-clipping lone gay rep on the Atlanta City Council, starts his second year in office on the high profile Public Safety & Legal Administration Committee, a move that puts him front and center on an issue that’s critically important to two bases of support: his District 6 constituents and the city’s LGBT residents.

Wan announced the appointment last week, but took his seat on the committee on Monday as it moves an apology for the botched police raid of the Eagle through for a full City Council vote (The council unanimously approved the apology late Monday). As City Hall continues to repair the damage done by the police raid, public safety issues remain front and center for many LGBT residents. In the vocal District 6, crime is especially on constituents’ minds.

“I will continue looking for ways to make city government work more effectively and efficiently with your tax dollars,” Wan said Thursday in announcing the appointment.

On Tuesday, Wan celebrates his first anniversary as the City Council’s first openly gay man and Asian American. He’s maintained a high profile since his inauguration, including hosting an LGBT town hall with police Chief George Turner in July to discuss public safety issues. On Dec. 14, Wan held a town hall meeting with neighborhood activists, Turner and other APD commanders.

He took part in a World AIDS Day event at City Hall with Mayor Kasim Reed and filled in for the mayor with a speech before thousands at the 20th Annual AIDS Walks Atlanta & 5K Run in October. He also heard an earful from gay bar owners in November over the city’s hike in license fees, which Wan voted to approve.

In addition to his Public Safety post, Wan retains his seats on the council’s Community Development/Human Resources and Finance/Executive committees.