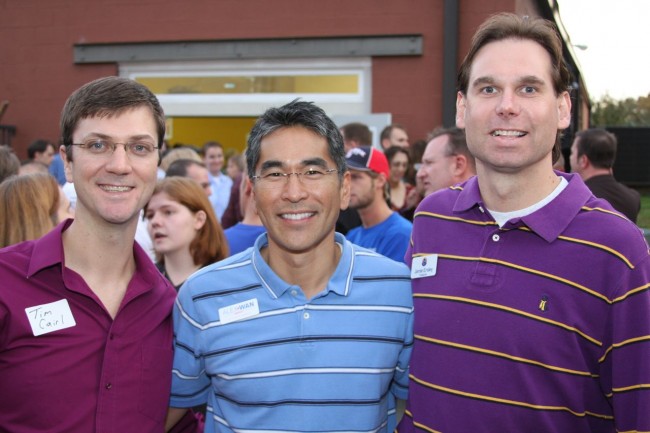 We won’t tell if you won’t. But gay Democrats joined with gay Republicans–we don’t know who crossed party lines first–to back Alex Wan’s bid for the District 6 seat on the Atlanta City Council.

The two groups — Atlanta Stonewall Democrats and Georgia Log Cabin Republicans — announced the endorsement Monday, adding their names to the growing list of groups lining up behind Wan as he approaches the Dec. 1 runoff. Wan placed first among six candidates in the Nov. 3 election, but his 32 percent of the vote wasn’t enough to avoid a runoff with Liz Coyle.

This from Tim Cairl, a Stonewall board member:

“Atlanta Stonewall is excited to endorse Alex Wan. We know Alex will stand strong for the shared values of all the families in our diverse neighborhoods. We can count on him to be responsive and to work tirelessly for positive solutions for all of Atlanta.”

And this from Jamie Ensley, president of GLCR:

“The Georgia Log Cabin Republicans are proud to stand with the Atlanta Stonewall Democrats and endorse Alex Wan for Atlanta City Council District 6. Alex is committed to improving public safety, and also will work hard to help relieve the property tax burden on homeowners through fiscal reform.”

“It further demonstrates the broad and diverse support that is an important cornerstone of this campaign,” Wan says in a press release. “A wide range of people in District 6–and beyond–have heard what we have to say and responded with their ideas, enthusiasm and support.”

Last week Steve Brodie, the gay man who nearly unseated incumbent Anne Fauver for the seat in 2005, endorsed Wan. Brodie placed a disappointing fourth in the six-person race Nov. 3, scoring less than half the votes he did four years ago in a two-person contest.

On Nov. 11, Wan announced the endorsement of the Gay & Lesbian Victory Fund, which like Georgia Equality, sat out the District 6 campaign until after the runoff despite three gay candidates among the field of six. Georgia Equality endorsed Wan Nov. 5, two days after the election.

On Nov. 6, the influential business group the Buckhead Coalition backed Wan and Nov. 10, Charlie Stadtlander also endorsed him. Stadtlander dropped out of the District 6 race in April to run for the Atlanta Board of Education. He lost the District 3 race to incumbent Cecily Harsch-Kinnane, 56 to 44 percent.

Wan also received the highest rating of “Excellent” from the Committee for a Better Atlanta, the only District 6 candidate to do so.