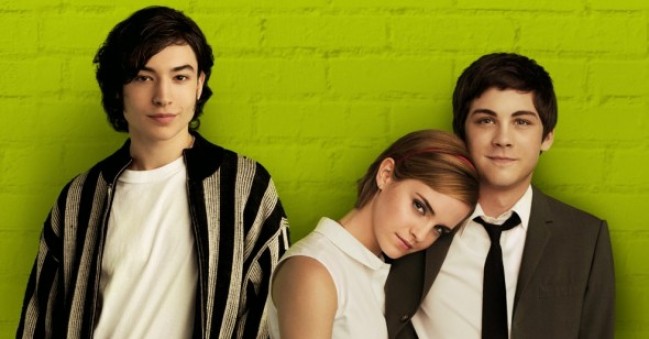 When the time came to make a film version of his gay-inclusive 1999 bestseller “The Perks of Being a Wallflower,” author Stephen Chbosky knew only he could be the man behind the camera. After all, it was his baby.

“This was my dream,” Chbosky says. “I was either going to direct this movie or it wasn’t going to exist. I knew what the book meant to certain kids, and I couldn’t let it go.”

The titular wallflower in question in the film and book is Charlie (Logan Lerman, photo-right), a lonely high school freshman. His only friend killed himself, then he meets seniors Sam (Emma Watson, center) and Patrick (Ezra Miller, left)) and at first thinks they’re a couple. Patrick turns out to be gay and in a discreet relationship with a football player, and they all become friends.

One of the most refreshing elements of the film – easily one of the best of the year – is the nonjudgmental attitude the main characters have toward each other.

“That is a world view I have, not just about the gay characters but all the characters,” says Chobsky, who was in Atlanta last week promoting the film. “That’s what is important about the whole movie to me. It doesn’t do anyone any good to vilify (one character) for being in the closet and dealing with what his circumstances are. I don’t judge people – it’s not good manners.”

Chbosky knew it was essential to find just the right actor to play Patrick, and in this case it was one that could relate to some aspects of the role. Miller came out as queer shortly before the film was released.

“I knew that kid, that character, that there was going to be one kid who could do that and probably only one,” the director says. “Ezra Miller is a miracle; he came in and was perfect. The fact that he came out as queer is great. To me, that was icing on the cake.”

Chbosky says his favorite character from the ‘80s was Ferris Bueller.

“When I was a kid, he was a hero to me,” he says. “And I said in ‘Perks,’ Ferris Bueller is going to be gay. Of all the characters, (he’s) the most confident, fearless, knows himself, (and) if someone calls him a name he turns around and hits him. I thought this was a really cool thing to do.”

The bullying themes in the book are even more prevalent today as the film comes out, Chbosky adds.

“If you are out, you’re out, obviously happier because you are true to yourself, but you’re a more legitimate target,” the director says.

Chobsky is also responsible for adapting the film version of the gay-inclusive Broadway smash “Rent.” The movie met with some resistance from critics and audiences, but it paved the way for him to do “Wallflower.”

“’Rent’ was my sparring session, my training wheels to be able to do this,” he says. “With ‘Rent,’ I had Jonathan Larson‘s show, all his notes, these beautiful characters, but I was an outsider, it didn’t come from me. It was a translation. All these muscles and tools I developed on that [I was able to use] many years later, with characters that are much closer to me, I am able to use that craft to make it work.”

‘The Perks of Being a Wallflower” is now playing in metro Atlanta theaters.