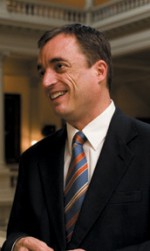 WABE weighed in on the death of Allen Thornell (photo) during its afternoon newscast Tuesday with a nearly two-minute report.

Graham most recently worked with Thornell at Georgia Equality, but the two met in the 1990s at a rally when Graham was working for AIDS Survival Project. He says Thornell’s dedication to studying “the people and politics that shaped Atlanta” was quickly evident.

“Someone told me there was a long man who really seemed to know a lot about politics and advocacy and I should really get to know him,” Graham says in the report.

“He was not one to seek out public recognition and took the most delight in the work that no one knew about,” Cope says in the report.

Thornell, 38, died on Monday after suffering a stroke. A public memorial service is set for Thursday at 2:30 p.m.

Listen to the full report. The piece on Thornell starts at 2:15.