Voters reject all but one gay Atlanta candidate 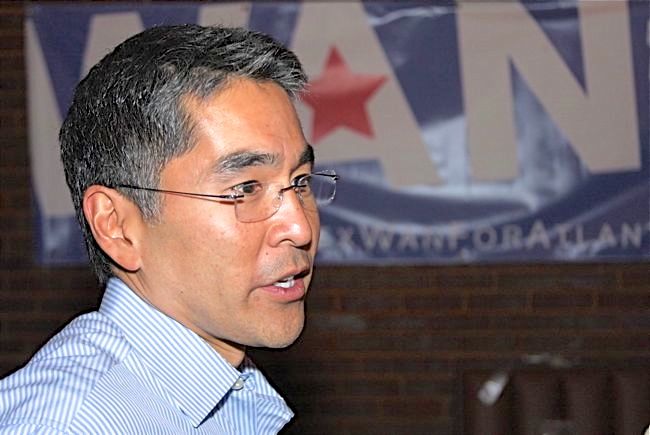 Just a single gay candidate won in elections across metro Atlanta on Tuesday, with voters turning out one LGBT incumbent and others performing embarrassingly poorly.

Alex Wan (photo) coasted to a second term on the Atlanta City Council, despite a controversial effort to push some sex shops off Cheshire Bridge Road. Wan promised a different approach to cleaning up the strip and, on Tuesday, celebrated at the sassy Colonnade on Cheshire to make that point. Even if the restaurant sits in front of this place.

“While we have made great strides in the last four years, we still have work to do,” Wan says in a prepared statement. “I am grateful that my friends and neighbors in District 6 have affirmed my track record. I look forward to continuing to represent the unique and diverse neighborhoods of Atlanta City Council District 6 at City Hall. I am humbled and honored by the broad base of support during this campaign; it’s a great springboard for a recommitment to the kind of collaborate leadership in which I believe.”

Wan easily dispatched opponents Mike Boyle and Tracey Austin, taking 76 percent of the vote to keeps his District 6 seat. But his win provided the only bright spot in an otherwise dismal showing for LGBT candidates on Tuesday.

Brian Bates, the other gay incumbent facing voters on Tuesday, lost to Dawn O'Connor, who beat him 60 percent to 40 percent. Bates was first elected to the District 2 At-Large post in the DeKalb city in 2007 to fill the unexpired term of a city council member who resigned. He easily won re-election in 2009.

Congratulations to Dawn O'Connor on her victory tonight. Wishing her the very best in continuing to move the City of Doraville forward.

Archibong sued Rinker and Enterkin in the closing days of the campaign and the AJC's PolitiFact dubbed Rinker's claims about her "mostly false."

"While last nights election results were not what I had hoped, I am so grateful to so many people who shared their love, time, energy, money, and prayers," Rinker wrote Wednesday. "This process was fun and exciting and it strengthened friendships, built new ones, and helped me see the good in people."

In Stone Mountain, David Thomas lost his bid for city council. Thomas won the backing of Georgia Equality, but lost the race for the open District 6 seat to Andrew Redmond, 54 percent to 46 percent.

In East Point, gay challenger De'Andre Pickett failed to break out from a pack of four challengers hoping to unseat incumbent Jackie Gibbons for the Ward D At-Large post. He scored 7 percent of the vote, while Gibbons appears headed to a runoff with Deana Ingraham.

"Tonight, the city of East Point made some VERY CLEAR choices in the races tonight. I am so proud of everyone who took a chance to represent the masses," Pickett wrote Tuesday. "Though East Point council is not our current future, me and some others do feel that I would better fit my services in other areas. We will rest and celebrate our success tonight, however I am looking forward to the next opportunity. REALLY SOON!"