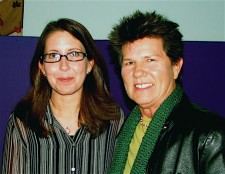 Much more than a name—GA Voice—was vetted Thursday when about 80 people gathered to hear plans for an LGBT news outlet helmed by Southern Voice’s former editor and its founder.

The meaning of community, the value of diversity and most of all, emotions were considered much more closely by the crowd than the project’s name.

The meeting for all comers took on a tone of fellowship befitting its surroundings at First Existentialist Congregation of Atlanta. People hugged one another and reminisced in an informal vibe that was more like a reunion than a business meeting.

And for about a third of the attendees, that’s exactly what it was. Some 30 people stood up to applause for having worked at Southern Voice at some point in the paper’s more than 21-year history. Only eight of the 20 people who were still employed at Southern Voice and David magazine when the publications folded last month were among the group.

It made for a crowd supportive of the effort to start a new publication by Chris Cash (photo, right), the paper’s first owner, and Laura Douglas-Brown (left), a 12-year SoVo veteran and its last editor. When Cash came forward and sat down on the steps leading up to the podium to start the meeting, the friendly, conversational atmosphere was set in stone for the night.

“We want to thank you for your presence here,” Cash said. “The concern and encouragement you’ve expressed has motivated us to fill that gap.”

Douglas-Brown laid out their vision for a “community owned, community led” news outlet.

“It’s really important to me that the decision making—on the business side and editorial side—come from our community, from Atlanta, from Georgia,” she tells Project Q Atlanta. “It means we’re not looking for some big investor who bankrolls the whole thing and then wants to control the whole thing.”

Getting off the ground

The new outlet is envisioned as a website-focused news and features product with daily updates. A companion printed newspaper will go into further detail, analysis and commentary on what the website reports.

The business model is to use the “Save SoVo” website to take donations from anyone willing to participate at any dollar amount. Those donations will address “launch costs” only, including administrative and legal fees for creating a corporation, office equipment and miscellaneous other fees that accompany processes like web domains.

That should take $20,000 to $24,000, according to Cash. They have already received a $12,000 matching grant from the gay benefactor Lloyd Russell Foundation in addition to other, smaller donations. At Thursday’s meeting, the gay employee advocate group Out & Equal pledged a $500 donation.

As opposed to start-up donations, investors will be sought out and offered shares in the new company once it’s ready, which Cash said will be soon “after the beginning of the new year.” Those funds will provide the operating capital for the ongoing venture.

A small staff that includes volunteers will likely start the publication when it gets off the ground “and build from there,” Douglas-Brown tells Project Q Atlanta.

Donations, inquiries and offers to volunteer can be directed for now through the “SaveSovo” site. Donations will stay on that site when a new website—the already secured TheGAVoice.com –will go live for the pending publication as soon as it’s built now that the name GA Voice has been chosen. The new site will include progress updates and other information.

Before the voting on the name got started, Cash and Douglas-Brown answered questions and comments. Cash, a former Atlantan who flew in from Dallas, Texas this week to work on the venture and will ultimately take a role on an advisory board when it’s up and running, made one point of order and asked the audience to “keep the conversation positive.”

Eight people stood up at a microphone to address the assembly. Almost all of them opened with regrets to the loss of Southern Voice and to the employees who were laid off. Topics on the table included making sure the new product would be mindful to include of all aspects of a geographically and culturally diverse audience, as well as specific content like sports coverage.

“Inclusion is very important to us,” Douglas-Brown said, noting that resources, both financial and human, are the key to coverage.

The big moment of the night went over with an easy vote on the name of the new project. GA Voice got 51 of the 71 hands that went up for three choices. There was little to no discussion other than the organizers’ explanation of the names on the table, and a short rumbling of private conversations between people sitting near each other.

Some 30 or 40 submissions for a name fell mostly into broad categories, Douglas-Brown tells Project Q Atlanta.

“We narrowed it down to three that we thought fit with the mission of a news organization,” she says. “And we did some preliminary vetting to make sure another news organization wasn’t already using those names right now.”

On Thursday, Douglas-Brown told the crowd that “the broadest category by far” kept the word ‘Voice’ in the name, and that she and Cash thought its merits included “a tie to the SoVo legacy, being a voice for our community.”

The other choices were GA Independent and GA Compass.

“It was a conscious decision to use ‘Georgia’ in all of the choices,” she said. “We want to recognize first and foremost that we are operated and focused locally.”

Cash made the point that ‘Georgia’ would not be spelled out. The name will always appear with the capitalized abbreviation ‘GA,’ “and you can pronounce it however you want,” she joked, implying that it could be pronounced to sound like “gay.”

Hugs and high hopes ended the meeting much as it began. As for a release date on the first publication, the pair says they don’t know yet.

“We don’t want to promise anything and not deliver,” Cash said. “As soon as possible.”

On Thursday night, Douglas-Brown said that the effort to start a new publication “may not be the first one out of the gate, but we want to take our time and get it right.”

“We don’t want what happened to the people who stayed until what turned out to be the very bitter end of Southern Voice to ever happen to anyone again,” she tells Project Q Atlanta.

Representatives from at least two other groups who are looking to start other new LGBT news outlets, including the Atlanta Free Press, were at the meeting. The Free Press is being created by the publishers of Gaydar magazine.

Photo of Douglas-Brown (left) and Chris Cash taken at the Thursday, Dec. 3 meeting to vote on a name for their pending publication.