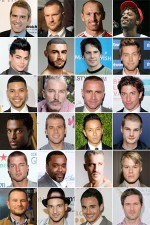 To supplement the time you spend fantasizing about your gay celebrity dream man, you can do your unrequited love a favor and vote for him in Out Magazine’s Most Eligible Gay Bachelors contest. The magazine opened its online poll (photo) on Tuesday with 100 out male celebrities for you to ogle. Amid ubiquitous reports of celebrity careers threatened by coming out and just as many stories of famous hotties flinging open the closet door anyway, you can choose favorites as often as once a day from a list that includes a little someone for every taste. Whether you’re into silver foxes like Bravo’s Andy Cohen, more of a dyed-black-in-the-wool Adam Lambert fan, a music lover into singer Jay Brannan, an admirer of Welsh rugby star Gareth Thomas, or a twink chaser who loves "Glee's" Chris Colfer, there’s a good chance your celebrity crush is among the finalists. To round out the list and to reach 100 choices, they even include porn stars like Francois Sagat and Colton Ford. The most popular among them will appear in an upcoming issue of Out. Enjoy the eye candy as you imagine your guy appreciating your obsessive daily vote enough to notice you.