Two of the three literary talents behind “Visible Lives” were on hand Saturday to read from their work in memory of E. Lynn Harris, the best-selling gay Atlanta author who died last July from a heart attack.

Stanley Bennett Clay and James Earl Hardy, who along with Terrance Dean contributed to “Visible Lives: Three Stories in Tribute to E. Lynn Harris,” spent time with fans of Harris during an evening event at Outwrite Bookstore & Coffehouse. 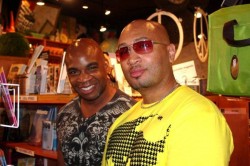 “The idea came in August, the book proposal was drawn up in September, we had a deal in October and the manuscripts were submitted in November,” Hardy says in an interview prior to the event. “It’s rare in publishing for a book to be produced that quickly.”

The three authors chose the title “Visible Lives” also in homage to Harris. His first book “Invisible Life” was released in 1994 and introduced Harris’ most popular character, the bi-sexual Raymond.

The tribute to Harris was the third hosted by Outwrite since the author’s death on July 23. On Sept. 22, a collection of authors, friends and family of Harris joined together to launch the national tour for “Mama Dearest,” his 12th novel. The store also hosted a Sept. 6 tribute to Harris, attracting scores of fans who remembered the author, delivering personal anecdotes and poignant stories of their interactions with him.