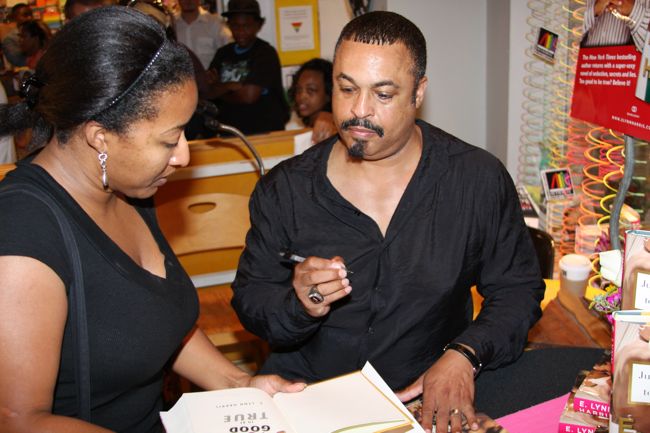 Following the death of E. Lynn Harris, one of the literary world’s most acclaimed and respected talents, Stanley Bennett Clay, Terrance Dean and James Earl Hardy decided to pay homage. They present the result and share their personal stories on Saturday at Outwrite.

In memory of Harris, the three noted talents in their own rights crafted “Visible Lives: Three Stories in Tribute to E. Lynn Harris,” celebrating Harris’ contribution to black and gay literature. Dean describes Harris (top photo) as an icon, saying he was important to the literary world because the author told everyone’s story.

“He told those stories that we dared not to tell,” Dean says.

Harris died suddenly July 23, 2009, while in Los Angeles promoting his latest release, “Basketball Jones,” which involved an NBA player and his gay lover. After much speculation, it was later learned that Harris died of heart failure.

Hardy says he was in New York when he got the news of Harris’ death. He describes his relationship with Harris as special, one that many would not have understood.

“It was like a member of the family had died,” Hardy says.

Dean was driving back to New York from Detroit when he heard. He says he burst into tears and had to pull off on the side of the road.

“I couldn’t focus,” he says. “I had just heard from him earlier that week, and he was in good spirits.” 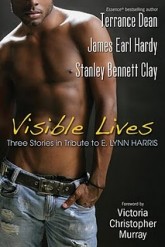 Just weeks after Harris passed, Dean and Clay were on the phone chatting, and the idea for “Visible Lives” was born. Then the pair called Hardy and enlisted him.

Hardy says it all came about lightning fast.

“The idea came in August, the book proposal was drawn up in September, we had a deal in October and the manuscripts were submitted in November,” Hardy says. “It’s rare in publishing for a book to be produced that quickly.”

They chose the title “Visible Lives” also in homage to Harris. His first book “Invisible Life” was released in 1994 and introduced Harris’ most popular character, the bi-sexual Raymond.

Each author wrote a novella for the project, and Harris appears as a minor character in each. Hardy revived his most popular characters, Mitchell and Raheim from his “B-Boy Blues” series, for his contribution.

“Each of our stories are about the very topic and subject matter E. Lynn was known for,” Dean says, “The complexities and challenges of black gay love between men, as well as their friendships with one another and with black women.”

It is their way of honoring Harris while at the same time keeping his work, legacy and memory alive, Dean and Hardy say.

“Too often, respected members of our communities pass on and don’t receive the kind of acknowledgment they should,” Hardy says. “This was our way of putting on paper just what he meant to us as fellow authors and as friends.”

The authors of “Visible Lives: Three Stories in Tribute to E. Lynn Harris” read from, sign and discuss the book at Outwrite on Saturday, June 19 at 7:30 p.m.

Mashaun D. Simon is a freelance writer based in Atlanta. He has contributed to the Atlanta Journal-Constitution, Black Enterprise magazine, Magazine Publishers of America, Essence and Written Magazine. He also co-founded the National Association of Black Journalist’s Gay & Lesbian Task Force. This article originally appeared on TheBVX.com.