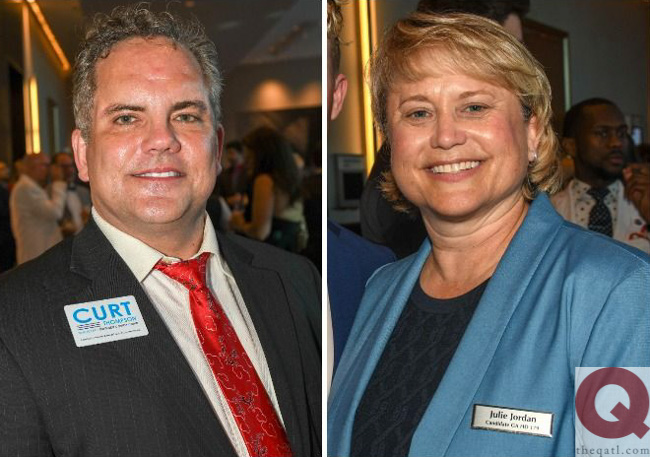 That makes 11 candidates in Georgia endorsed by the LGBTQ organization in 2020.

Jordan (photo right), a lesbian school administrator, called it “a tremendous honor.” She’s running against state Rep. Don Hogan for the House District 179 seat in a rematch of their 2018 contest.

“As a LGBTQ+ candidate in 2018, I was touched by members of our community who approached me with their support and inspiration,” Jordan told Project Q Atlanta. “I represented a unique new perspective that our local politics had never seen, and I was pleased to receive over 42 percent of the vote.”

“With the support of our local and national LGBTQ+ community, I know I will finish the race, unseat the Republican incumbent and bring a new voice from coastal Georgia to our state legislature,” she added.

Thompson (photo left) said he was “pleased, excited and proud” of the endorsement.

“And the fact that it looks like the primary is going to go forward May 19 makes us feel good about where we are in the race,” he added.

Thompson would become the second openly LGBTQ member of the commission and the first-ever LGBTQ chair of the state’s second-largest county if he wins. Ben Ku became Gwinnett’s first openly LGBTQ commissioner in 2018.

Thompson, who represented Senate District 5 in Lawrenceville from 2004 to 2018, attended Victory Fund events in Atlanta in August and October. Several elected officials and leaders across the state – including three LGBTQ city councilmembers – endorsed him in February.

The Victory Fund has endorsed 186 LGBTQ candidates in the 2020 election cycle, according to a press release. Annise Parker, the organization’s president and CEO, said LGBTQ candidates are finding new ways to reach voters.

“We can double the number of LGBTQ members of Congress, elect history-making trans candidates to state legislatures and put LGBTQ people in high-level positions in states across the nation,” she said in the press release. “We are on track to elect more openly LGBTQ people than ever before in 2020,  and our nation will be better off because of it.”

The Victory Fund endorsed the re-election campaigns of all five LGBTQ state lawmakers in Georgia in December. The group also endorsed three LGBTQ first-time candidates running for the state legislature.

The primary elections are May 19 and the general election is in November. Georgia Secretary of State Brad Raffensperger announced Tuesday that absentee ballot request forms will be mailed to every Georgia voter for the May primary. It’s an effort to encourage voting by mail during the coronavirus pandemic.

The March 24 presidential primary was moved to May 19 due to the pandemic.