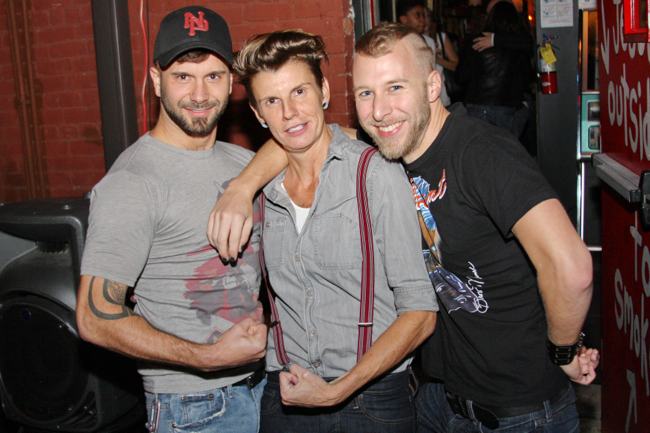 There is rest for the weary. DJ Vicki Powell, the local lesbian legend who spins out signature late-night themed events for her alternaqueer friends, closed out her popular patio party series on Sunday.

And it was exactly the affair you’ve come to expect from Powell. DJ Stefan Kallweit warmed up the crowd as it filtered into Sister Louisa’s Church of Living Room & Ping Pong Emporium, Powell mingled and the people drank. Her patio parties aren’t a fancy cocktail sort of gig; party-goers often have smokes in one hand and PBR tall boys in the other.

For Powell, her winter break came after a busy few months. She opened her party season with Boombox in March, went poolside during summer, worked Backpack in the Park and opened for Erasure in August, and showed her fashion sense, too. To prove that this lesbian isn’t afraid of scruffy guys, she was among the diverse crowd for ManShaft’s pool party, too.

Before Sunday’s patio party closed her season until spring, Powell also put her talents together with Kyle Keyser for the Fame party over Halloween weekend and offered a slice of Heaven during Pride.