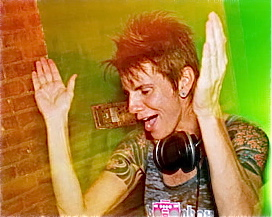 DJ Vicki Powell retired her FLUX parties with one last blast Saturday at the Sound Table. Per usual, revelers moved and grooved to the DJ’s signature beats and fully embraced her “Get into it!” mantra.

But don’t fret. Powell (top photo) isn’t going anywhere herself. As one of gay Atlanta’s favorite beat masters, she simply decided that the time is ripe for a name change to freshen her signature parties. Farewell FLUX may be the final time she moves a room under that party title, but Powell tells fans to look for her new Boombox parties with a “wall of sound” to begin soon. And she promises her motto won’t change either. Powell will still urge everyone to “Get into it!” on a regular basis.

And of course, she continues to lend her name and talents to big parties and good causes. The Sept. 18 event came on the heels of Project POP Happy Hour with Project Q Atlanta, Out On Film and Atlanta Pride, which bumped to the Powell beat the previous night.

Next up for Powell: The Evolution Party on Wednesday is the Pride pre-party contribution by Carma Productions. They’re the folks celebrating the 20th edition of the Gay Community Yellow Pages and the nationwide launch of the Gayborhood mobile app.

October dates already set for Powell include the Las Margaritas Patio Pride Brunch on Oct. 3, Ria’s Bluebird 10th Anniversary that same night, the Pride Heaven girl party on Oct. 8 at Park Tavern, and Powell’s birthday brunch/Pride parade party on Oct. 10 at the Livingston. She continues past Pride at events including an AIDS Walk fundraiser at Amsterdam on Oct. 15, the AIDS Walk itself on Oct. 17, and Bellissima’s Titty Titty Bang Bang on Oct. 23.