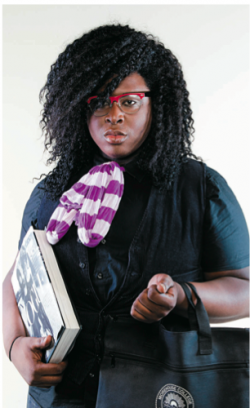 Urban music monthly Vibe hits stands this week with a look at the ever-present tensions on the Morehouse campus between the school’s hyper-masculine attitude and its gay students. Writer Aliya S. King profiles several current and former Morehouse students whose flamboyant tastes in gay pose an affront to the Atlanta campus of 3,000 students. The article--provocatively titled “Mean Girls of Morehouse”--is based on the apparently self-titled group of gays known as the Plastics and some of the same ones targeted by the school last year with its “Appropriate Attire Policy.”

Built like an NFL linebacker, the 6’4” freshman politely turned down the Morehouse head football coach’s invite for a tryout soon after he arrived on campus. Phillip—who hails from Fort Lauderdale, Fla.—came to Morehouse in hopes of pleasing his father, a minister from Jamaica who he says is staunchly homophobic. “I’ve always wanted to be a man’s man,” says Phillip, with a sigh. “I wanted to be masculine. I thought by coming here to Morehouse I could be the masculine man my father wanted me to be. The first day I got to campus, I was a boy. I had my little dreads pulled back, jeans and all that. Trying to be this masculine boy, real cool and real quiet.” It took exactly one day on campus for [Phillip Hudson, photo] to see that this plan was not going to work. “The first time I walked from my dorm to student services, someone yelled out ‘faggot’ and a crew of boys started laughing at me.” Phillip throws his hands up dramatically. “That was it. I was going to have to be me. There was no hiding that I was not masculine. That I was not a boy. I went back to taking my female hormones and rocking my hair.”

The article earned a rebuke from Morehouse President Robert Franklin before he even read it.

As president of this institution, as a Morehouse graduate and as a father, I am insulted by what is to be published. Addressing our young men as “girls” is deeply disturbing to me, no matter what the remainder of the article may say. Morehouse has for 140 years developed men—men who are equipped to live and contribute to an increasingly diverse, global and complex world.

Tackling homophobia is nothing new for Morehouse. In fact, the school has shown over time it’s not particularly adept or interested in doing so. The “Appropriate Attire Policy” bans women’s clothes, makeup, high heels and purses. But school officials, according to the Vibe article, tend to be more harsh on these violations than others that ban saggy pants and ball caps in classrooms. In February 2009, an editorial in the student newspaper railed against “effeminate men” though Franklin, in a Washington Post column three months later, addressed the need to respect different sexual orientations and the contributions of gay men to society. The school’s lack of tolerance came under fire after a gay-bashing in 2002 and again in 2006 when allegations of an anti-gay firing surfaced.