Vernon Jones is back; his gay record still stinks 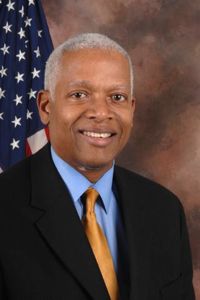 Vernon Jones and his lackluster record on LGBT issues is back, and the mercurial former DeKalb County CEO wants to unseat one of Georgia’s most gay-friendly members of Congress.

Hank Johnson (top photo), who won the Fourth Congressional District seat in 2006, has become a leading progressive voice in the House, second only to U.S. Rep. John Lewis in supporting LGBT issues. Johnson scored a 95 on the Human Rights Campaign’s most recent Congressional scorecard, taking the second-highest score in Georgia. Only Lewis scored higher in notching a perfect 100.

Johnson is a co-sponsor of a trans-inclusive employment non-discrimination bill pending in Congress; he supports the Domestic Partnership Benefits & Obligations Act, which would grant domestic partner benefits to federal workers; he backs the repeal of the military’s ban on openly gay service members; and he is a co-sponsor of the Respect for Marriage Act of 2009, which would repeal the anti-gay Defense of Marriage Act.

In other words, the only way Johnson could become more supportive of the gays is to come out and tell Oprah about his life on the down low inside the Beltway. Short of that, his support of same-sex unions puts Johnson far ahead of Jones, who did little to support LGBT issues while at the helm of the second-largest county in Georgia.

In fact, Jones takes most every chance he can to knock gay marriage. He did so during the 2004 debate in Georgia over a constitutional amendment banning gay marriage and again during his failed primary campaign in 2008 for U.S. Senate, where he worked to be the most conservative Democrat in the race by proudly recalling that he twice voted for George W. Bush. 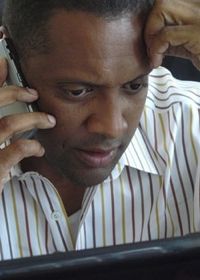 Jones (bottom photo) announced on Friday his bid to unseat Johnson. Two other candidates are also in the race — DeKalb commissioners Connie Stokes and Lee May. The district, which includes a heavy helping of gay voters in DeKalb, has long been a popular seat for progressive lawmakers. Cathy Woolard, the state’s first openly gay elected official, resigned her post as Atlanta City Council President in 2004 to run for the post, though she lost in the Democratic primary.

Johnson, despite a bout with hepatitis C, wants a third term.

Jones, known as much for his flamboyance, charisma and sexcapades as for his leadership deftness, pledged that he’s a changed man during his campaign announcement.

“For the past year, I’ve done a lot of reflecting and listening,” Jones said. “I’ve realized I made some mistakes in the past. And I’ve certainly learned from them. I’ve learned humility and I’ve learned contrition.”

Standing in front of a “jobs first” banner, Jones said he’d tap his experience as a businessman, state lawmaker and county chief executive to help small businesses and spur job creation in the district, which includes parts of DeKalb, Gwinnett and Rockdale Counties.