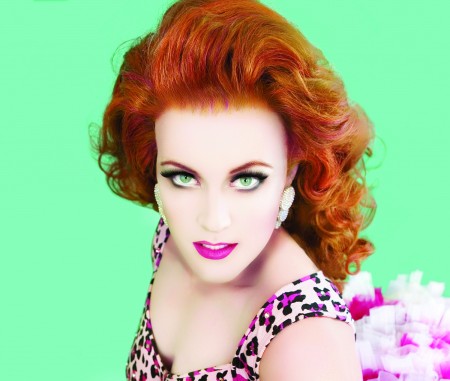 Hold onto your wig.

If you only know drag icon Varla Jean Merman and her winning pink jumpsuit in last season’s “Project Runway” drag challenge, or from her saccharine-sweet role in the film “Girls Will Be Girls,” you’re in for a treat.

The cheesy, over-the-top film gives the parody a lot of material.

“Anything in the movie that is funny where it wasn’t meant to be, we pick up on those points and take them to the next level,” Roberson says. “The movie doesn’t really make sense, the whole story is so convoluted and confusing, and we just exploit every detail.”

Even if there’s a special connection for audiences that relish the original, you don’t need to know the movie to enjoy the play, Roberson says.

“It’s insane,” he says. “Whether you are familiar with the movie or not, the whole thing is so out of left field, unexpected and completely crazy. People will be rolling in the aisles.” 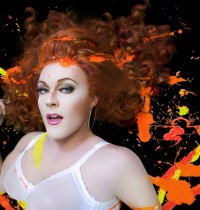 The play stars accomplished actor Ricky Graham in the Bette Davis role of Charlotte, who is believed to have beheaded her boyfriend some 35 years ago. Varla Jean plays the Olivia de Havilland part, something Roberson says is quite appropriate.

“Olivia was known for her roles as the good girl, like in ‘Gone With the Wind,’” he says. “She’s the evil cousin here, so for her it was a departure — one that doesn’t work at all in the movie, but works for us perfectly, because Varla is sort of known as the girl next door, and I play it up to the hilt.”

But let’s get down to the dirt. Project Q Atlanta spent a half hour this week with Roberson (who slipped in and out of Varla) on the eve of her local debut. Roberson, like Varla, was notably friendly and forthcoming.

Besides the show, we talked about Varla Jean’s legend (she’s the love child of Ethel Merman and Ernest Borgnine), her career (which includes Mary Sunshine in “Chicago” on Broadway, plus several movies, TV shows and stage works) as well as about what goes on behind the cameras at “Project Runway.”

She’s more than an Amazon Anne Margaret with giant red hair and even bigger boobs.

Q: For those who’ve been living under a rock, how would you describe Varla Jean Merman?

A: Varla is really very sweet, with a naughty side. She sings, she’s funny, she’s beautiful, but she’s really someone you’d be proud to take home to mama.

Q: Your singing voice is amazing. Did you have any classical training?

Until I did “Chicago,” I really just faked it, the falsetto, but then with several shows a week, I needed to study how it’s actually done. So after that, I just sustained it, and I think it’s better than ever now.

Q: You may be best known nationally for the DVD hit “Girls Will Be Girls” with CoCo Peru and Evie Harris. How did that come about?

I knew Miss CoCo [Clinton Leupp]. She was one of the first people I met when I moved to New York. She moved to LA and met Jack [Plotnick, “Evie”], then I knew Jack through another friend. Jack knew Richard Day who wrote it and did such a fabulous job.

Q: We hear that “Girls Will Be Girls” continues online.

Yes! During the writers’ strike, Richard Day was bored and used his own money to create the webisodes. CoCo and Evie are in the first two, and I’m in the third. It’s hilarious. Varla gets a lesbian stalker.

Q: You know our readers are dying to hear about the drag episode of “Project Runway.” Dish!

[Previous ‘Runway’ contestant] Chris March picked everybody. The show asked him to. We all know Chris; he used to do costumes for me, Hedda and some of the other girls. So once we all agreed to do it, it was really really fun.

Q: Varla’s pink sailor costume won the challenge. Did you actually like the outfit?

I loved it! I didn’t get to keep it, though. They auctioned them all off for Actors Equity Fighting AIDS, and actually raised a ton of money, so it was really neat.

Q: Anything surprise you behind the scenes after seeing the show on TV?

They don’t play any music during the runway show. They add that in later, so it’s actually quiet and you can hear the judges talking to each other. I heard Heidi Klum say, “Look at her butt!” It was really funny. 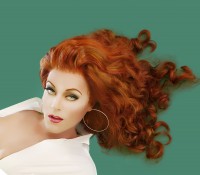 Q: You worked with the only straight male designer on the show, Joe. Now that you’ve seen the season, was there anyone else you’d have liked to work with?

Joe was great to collaborate with. But Jarell was really, really nice to me. Of course, before it aired, we didn’t know these people like everybody knows who they are today, but he was really nice, and that might have been fun.

And as far as the designers, I loved Korto. She could do no wrong all season. I don’t know if her style is right for Varla, but I thought her designs were amazing every episode.

He’s exactly like he is on TV: very gay, and very nice.

Q: But back to business. What are you most looking forward to in Atlanta?

I think “Shut Up, Sweet Charlotte” is just perfect, since it’s so Southern Gothic, and y’all just automatically get that whole thing. As far as the city, I don’t know what to expect. I’m open to anything! When I did that movie “Drag Time,” I met Charlie Brown and Raven, and I loved them. You better believe Varla loves a drag show, so I will definitely go out and catch some while I’m there.

Q: What may surprise people about the show? What can we expect?

The number one thing is that you can bring your gay friends and you can bring your mama. That’s what’s so great about this. It appeals to the old ladies who saw the original movie, and to the gay audience who loves to make fun of it. So it’s just perfect theater; if you get the gays and the grays, you’ve got a winner.