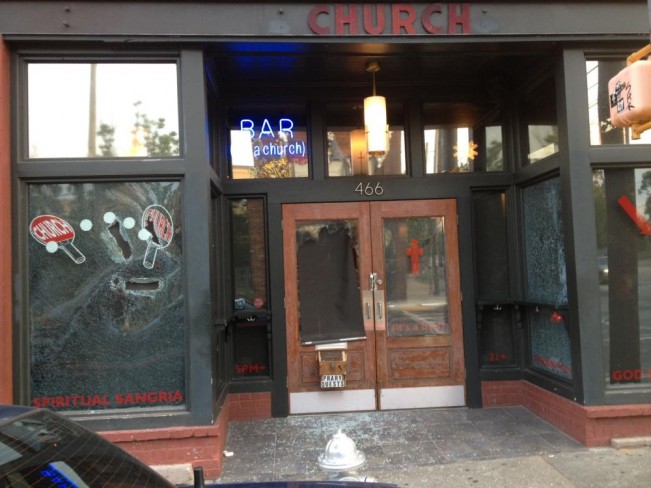 Atlanta artist and former bartender Grant Henry founded the bar for poets, artists and madmen a year and a half ago. He based the kitschy Sister Louisa’s Church of the Living Room & Ping Pong Emporium on his own fallen-nun alter ego Sister Louisa and the religious parody artworks he creates under that name.

That attracted attention from loyal patrons who enjoy the Spiritual Sangria, nightly fellowship and events like lesbian DJ Vicki Powell’s monthly Sunday Services set (view photos) on the patio. It also got the attention of some neighbors, nearby churches and other protesters who think the theme is sacrilegious. Henry tells Atlanta magazine that Saturday’s vandalism was a “hate crime.”

Front windows and doors were broken, liquor bottles smashed, and beer taps were left running but that nothing was stolen, including cash and valuables left in open view. Damages are estimated at $3,000. “This doesn’t have anything to do with a break in,” Henry says. “It was definitely targeted.”

At 5:12 am on Saturday, Henry answered a call from his alarm company alerting him to motion on the bar’s first floor. By the time he arrived minutes later, police were already on the scene. The front door windows, which depicted crosses, were both smashed. Bricks had been thrown through a window with the word “Church.” Henry stood outside while police investigated.

“The investigative unit came in and did what they do. Then they came out and said that it is clearly a hate crime. Because they didn’t steal anything, they took nothing, they left things of value, and they only targeted the word church and they targeted the booze behind the bar, you know, on the altar.”

After an outpouring of support for Henry and the bar, the damage was repaired and the liquor replaced in time to open for business as usual on Saturday night and in plenty of time for Powell’s party on Sunday.