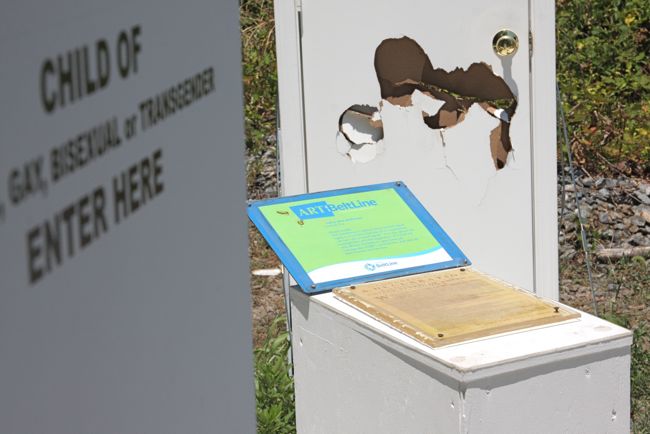 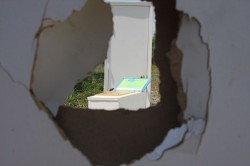 Vandals have nearly destroyed a public art piece by a gay artist installed on the Beltline in Midtown, the second time they’ve struck the exhibit sponsored by the Atlanta Pride Committee.

The severe damage to the work, titled “Locked Out,” was discovered by Pride officials on Saturday. Pride commissioned Larry Jens Anderson for $3,000 to install the exhibit as part of “Art on the Beltline,” a temporary art project that places visual and performance art along points on the Beltline through October.

Pride hoped the piece would raise the issue of LGBT equality and the organization’s profile as an arts and cultural organization, not just the mostly-volunteer run group that stages the Atlanta Pride Festival in October. 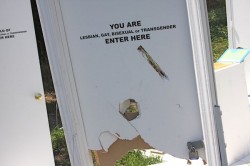 Anderson’s piece was installed along a stretch of the Beltline in Midtown above North Avenue near City Hall East. It sits near a handful of other pieces of art that did not appear to be vandalized when examined by a reporter on Sunday. That fact – and that “Locked Out” has been damaged once before – leads Pride officials to suspect that the exhibit is being targeted for its message about LGBT equality.

“The piece is about the denial of rights to queer aspects of our community,” says Cain Williamson, chair of Pride’s board. “The fact that there was no other art that was vandalized would indicate that there is some anti-queer motivation behind what was done with this piece of art.”

“Locked Out” is a mixed media exhibit with a series of five white doors, each with a caption that reads child, mother, father or friend of lesbian, gay, bisexual or transgender with the door opening to an explanation of the piece and a copy of the Declaration of Independence. But the fifth door – which reads “You are lesbian, gay, bisexual or transgender” – is locked as a symbol of how LGBT people can’t enjoy the same rights as heterosexual citizens. 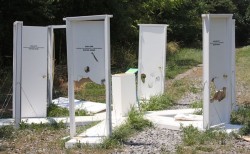 The inscription on the piece reads: “This installation is about being denied equal rights in a country that has at its foundation, ‘all men are created equal.’ It is also about the homophobia and the legislation of it that not only effects the lesbian, gay bisexual, transgender (LGBT) communities, but also all their friends and families.”

Anderson delighted Pride goers last year with his “Only Dick, No Jane” exhibit at the W Atlanta Midtown. He is a professor at the Savannah College of Art & Design in Atlanta and was also one of the SCAD art teachers featured in December’s “Wonderland” exhibit at gay-owned Kai Lin Art Gallery.

Williamson says the Beltline worked with volunteers and the artist to repair “Locked Out” after it was first vandalized. He said Pride will work to repair the work again.

“I’m hopeful that we will be able to restore the piece one more time and hope that it will remain unvandalized for the rest of the summer so we can use it at the festival in October,” he says.

A Beltline spokesperson says “Locked Out” will be repaired as soon as possible. The exhibit is one of several pieces that have been vandalized since “Art on the Beltline” opened in May, the spokesperson adds.

“The fact that this piece of art has been vandalized with someone with an anti-gay motivation is a indication that there is more that we need to do,” Williamson says. “To further queer activism in the Southeastern U.S., this seemed like a fantastic opportunity to marry the arts and cultural aspects of what we are doing with the activism of our work. Really, $3,000 is a small price to pay to create the space we created that the entire community is able to access.”