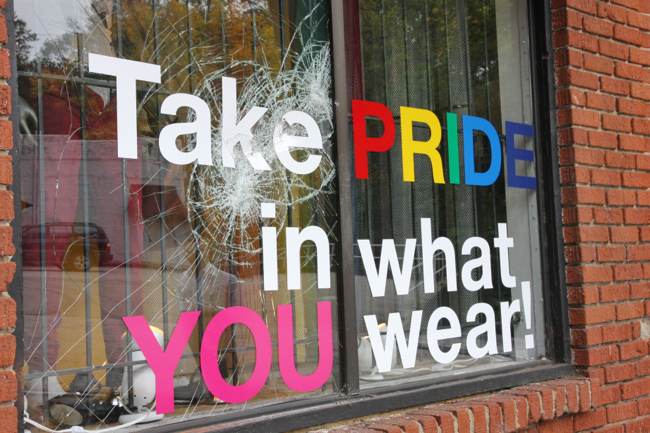 Vandals hit gay retail outlet Boy Next Door in Midtown early Thursday, damaging windows as they attempted to smash them with rocks. The rocks bounced off the reinforced front door and nearby window, so the vandals then attempted to throw a rock through the window that fronts Piedmont Avenue. That window – displaying the message “Take Pride in what YOU wear!” in large letters – sustained heavy damage but was not shattered (top photo). The vandals struck about 4 a.m. Thursday morning, according to Raymond Dowis, the store’s general manager. Whoever damaged the store did not gain entry, but they were caught on video surveillance cameras, he says. “You could tell by the way they parked that they were familiar with our cameras,” Dowis says. An Atlanta police officer and crime scene technician were still at the store about 11 a.m. on Thursday. One of the agency’s LGBT liaisons, Officer Brian Sharp, was also at the scene. Dowis says that the vandalism could be related to the recent Atlanta Pride festivities – the exterior of the store is decorated with several rainbow flags – or a recent article in Fenuxe that denigrated gay Atlanta bars. The clothing store advertises in the magazine and since controversy erupted over the article last week, Boy Next Door has received threats called into the store and posted on its Facebook page, he says. Some people incorrectly equated the store’s advertising with supporting the content of the article, Dowis says, and threatened to throw a distribution rack for Fenuxe through the store windows. The store removed the rack last week. “It is not going to stop us. We are going to continue to support the community,” Dowis says. 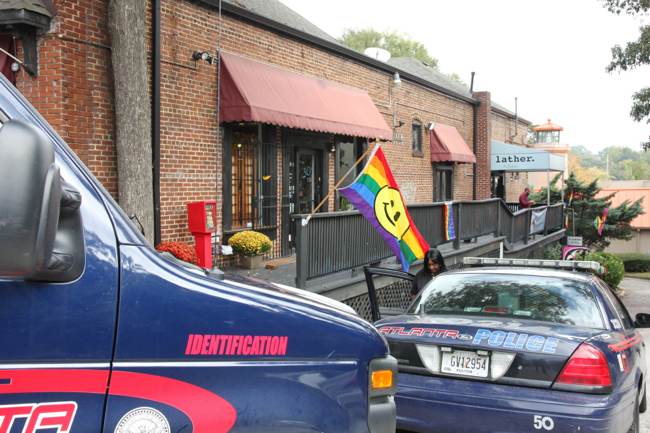