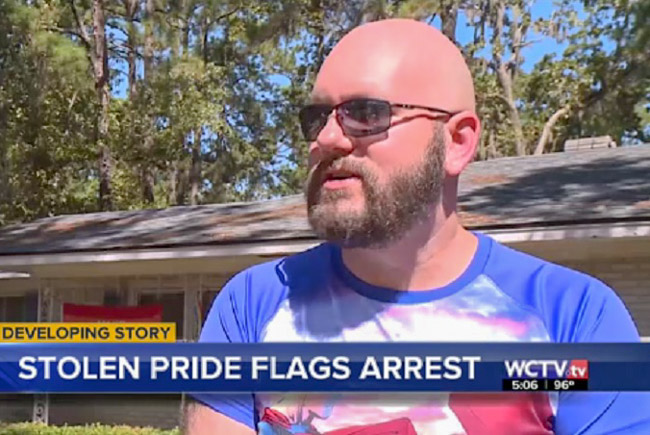 Valdosta police arrested a man for allegedly stealing several mini Pride flags and a yard sign from the home of a gay couple.

It was the sixth time the couple’s home has been vandalized, including one instance in which a Pride flag was taken down and left burning on their front steps, according to WCTV.

The latest incident occurred on Sept. 29 when a witness called police about a man stealing Pride flags from the home of Clay Bass and Brian Meeks, according to WALB News 10.

Police arrested Jake Dromgold, 25, and booked him into the Lowndes County Jail on a misdemeanor charge of theft by taking.

Bass (photo) said he plans to press charges. He added that he and Meeks are being targeted for being gay, according to WALB.

“It feels good because it’s making a statement that we’re not going to back down. We still are who we are and we’re still a part of this community,” said Bass.

Just a few weeks before the latest incident, the couple found their Pride flag torn down, its pole broken and the flag burned on their front porch.

They put up hundreds of Pride flags across their yard in response, according to WCTV.

“We're not backing down. We just want to be a part of [the Valdosta community] but still be ourselves, and that was just blatant ignorance,” Bass said. “We're not going to stand for that.”