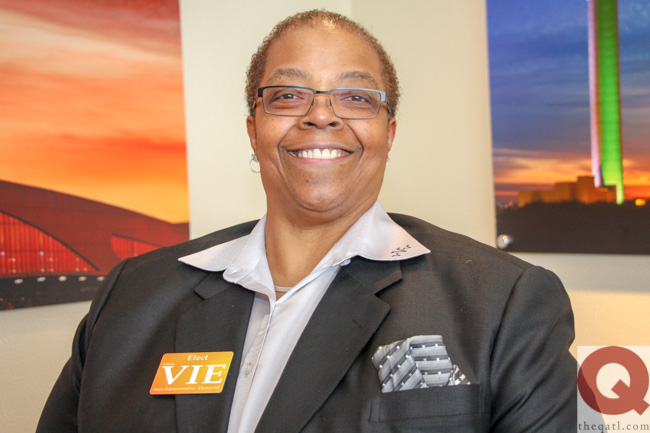 Valerie Vie wants a rematch. So the attorney dusted off her campaign playbook from 2016 and is running again for a seat in Georgia House, this time hoping to beat the attorney that defeated her two years ago.

If she wins, Vie could become the fifth openly LGBTQ member of the Georgia House.

“I am going to be the people's candidate and demand transparency,” Vie said. “I believe when you run for an office the people should be your compass and I don't believe we have that in our district right now.”

Vie is running for the District 62 seat in the state House, an area that includes portions of East Point, College Park, Douglasville and Union City, and Fulton and Douglas counties. In 2016, she placed first in a crowded primary but then lost to William Boddie in the runoff.

On May 22, Vie and Boddie will face off in the Democratic primary. With no Republican in the race, the winner of the primary takes the office.

Vie said as a state lawmaker, she would communicate more with residents of the district, lobby for the interests of the new City of South Fulton and fight against anti-LGBTQ legislation, such as “religious freedom” bills.

“I want to inform the people on what is happening, as opposed to I do it and tell them later. People just don't believe we are working for them. We have to change that if we want people to vote,” she said.

Vie has served as president of the Douglas County Bar Association and has worked in her community – her law offices are in Douglasville – addressing issues including homelessness and youth truancy. She was also elected the first African-American Bar president in the county, which pushed her – a Democrat – to find ways to work with a Republican-heavy bar in the area.

Vie said she won't shy away from working with lawmakers in both political parties to craft bipartisan solutions on public policy issues – even if that approach led her to be branded as a Republican in the 2016 race.

“I am running as a Democrat. But when I talk to my Republican colleagues, there are a lot of things that we agree on. The most important thing is to find out what those things are, do some bipartisan efforts – education being the big one. Can't we come up with something that we agree on and make a difference in those areas,” Vie asked.

Vie said as a state lawmaker that she would also stand firm against anti-gay “religious freedom” legislation pushed by conservative Republicans.

“If I am elected, I will be there in full armor to defeat all of these bills that discriminate under the guise of religious freedom,” she said.

“I'm just overwhelmed by how many times we try to pass bills that might seem on their face neutral, but have a discriminatory effect, whether it's minorities, LGBTQIA or women. Let's do things where everyone has a fair opportunity,” Vie added.

In the rematch against Boddie, Vie said she is urging voters to consider the last two years and ask themselves a simple question.

“Have you seen a difference in your life,” Vie said.

Vie said she's seen an influx of volunteers and support for her campaign.

“It has been great. I am excited about it. People are asking how they can help. People are eager to help and get yard signs. They are excited again,” she said.

“People are clear about one thing. They want politics in a different way. They want people to be responsive to them and not go down to the State Capitol and do the same old, same old,” Vie added.

With less than two months before Atlanta elects a new mayor, LGBTQ and allied voters face a crucial decision about who leads the city...
Read more
Community

Two-thirds of the 28 anti-LGBTQ hate crimes reported in Georgia by the FBI in 2020 occurred in metro Atlanta. The number of overall hate crimes...
Read more
Community