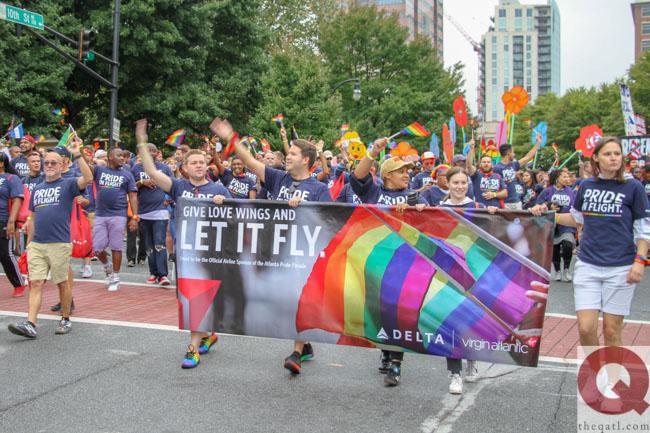 Delta Air Lines will start using new versions of in-flight movies that include LGBTQ love scenes, following widespread criticism of the censorship — including from one of the film’s directors.

The Atlanta-based airline came under fire for showing versions of the movie “Rocketman” with a gay kiss removed and a version of “Booksmart” with a lesbian love scene removed.

“The studio has agreed to provide a special Delta edit that retains the LGBTQ+ love scenes in both ‘Booksmart’ and ‘Rocketman’ that will be on our flights as soon as possible,” Delta spokesperson Adrian Gee told Project Q Atlanta in a statement. “Currently, we have ‘Gentleman Jack,’ ‘Imagine Me and You,’ and ‘Moonlight’ onboard and countless content in the past that clearly shows it is not our practice to omit LGBTQ+ love scenes.”

Delta did not edit or ask for any edits to the films, according to Gee.

“We are immediately putting a new process in place for managing content available through Delta’s in-flight entertainment,” Gee said. “Studios often provide videos in two forms: a theatrical, original version and an edited version. We selected the edited version and now realize content well within our guidelines was unnecessarily excluded from both films.”

“We are working to make sure this doesn’t happen again,” Gee added.

“Booksmart” director Olivia Wilde criticized the airline over the edits during a panel discussion at the SCAD Savannah Film Festival in late October. She said expletives and a male character imitating a sex act with a microphone were included, but a reference to “vagina” was cut.

“So I’m just curious what a woman is supposed to take from that,” she said according to Vulture. “That it’s an obscenity. That it’s inappropriate.”

Delta also faced criticism in 2016 for showing versions of the movie “Carol” with a lesbian kiss and brief nudity during a sex scene removed. The airline blamed the movie studio for removing the content.