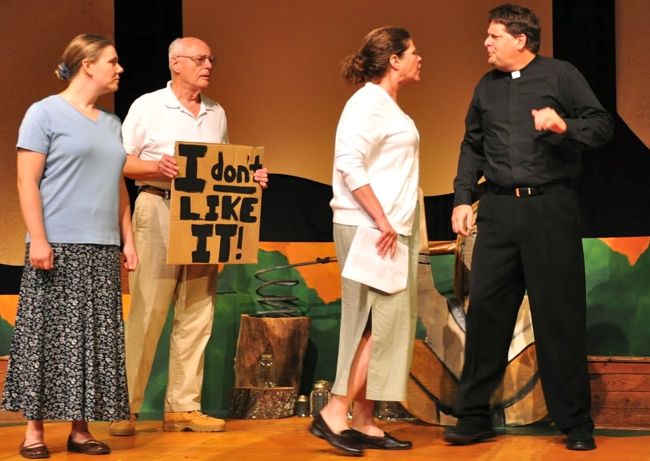 How does a Digging Dyke of Decatur deliver a theatrical takedown of a combustible topic that nearly tore a north Georgia county apart? With whimsy, humor and a former bass player for Indigo Girls.

Lisa Mount also had to draw on her decades of theater experience and mix it with her background in LGBT activism to produce and direct “Headwaters: Didja Hear?,” which opens Thursday at the Sautee Nacoochee Center about 90 miles northeast of Atlanta. The play tells the story of a group of White County High School students who fought to establish a gay-straight alliance in the conservative community and met with considerable opposition, including a visit by wingnuts from the notoriously anti-gay Westboro Baptist Church.

Mount says she and the other artists behind the award-winning community theater effort wanted to tackle the GSA controversy for some time, but first needed to establish the annual summer story performance before approaching the gay flashpoint.

“Part of the reason I came to Sautee Nacoochee is that it is such a genuinely queer-friendly place, but it is in the middle of White County, which is not a queer-friendly county,” Mount says. “This a fragile and beautiful place and we do all have to live together.”

But that didn’t deter their exploration into bullying and LGBT rights. “Didja Hear?” pulls together a cast of 22 with at least four LGBT actors and two musicians, including Dede Vogt, a popular Atlanta solo artist and former bass player for Indigo Girls who wrote some of the score for the play. The two-hour production is about gay issues, after all, so of course there’s music. But the 8-person orchestra includes a banjo, fiddle and drums. It is north Georgia, y’all. 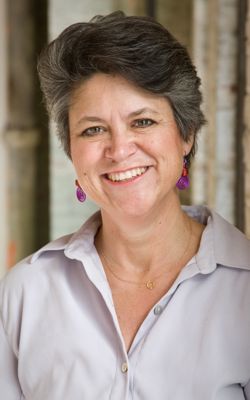 “It’s funny and there are songs. It is 22 local residents, some of whom haven’t been in a play before and others were theater majors. But it is real. You can’t see it anywhere else. A couple of the actors were involved as the whole thing unfolded. There is a relevance and immediacy that you don’t just get with any kind of theater,” Mount (second photo) says.

The production strikes a delicate balance in confronting bullying and anti-gay rhetoric while respecting the conservative context in which the play is set. Mount and the play’s writers – Jerry Grillo, Gerard Stropnicky and Jo Carson – expected to face some blowback from White County residents over “Didja Hear?” But that has yet to materialize, a sign that Mount says shows that the community has evolved in some ways on LGBT issues since the GSA controversy unfolded in 2005.

“I’m particularly fascinated by the change I’ve seen in the last six years in this tiny place in terms of attitudes and beliefs. I thought we would be mired in controversy and have to deal with haters, but not yet. We’ll see,” Mount says.

The play is ripped from the headlines, crafting its story from the controversy that erupted when high school student Kerry Pacer and others fought in federal court to force the school district to allow the LGBT organization to form. Pacer was named “Person of the Year” by the Advocate and became the face of the debate, but other students including Alex Sherman also took part.

Much of the play centers on the story of Sherman, as portrayed by Max in the production. But “Didja Hear?’ also tells the story of a deaf student who finds a way to use her creative talents in spite of being bullied, mountain heritage and moonshining, and other ways in which people find new ways to listen.

“This is a milestone to be able to show the story of uppity gay kids in Appalachia, rural life in the context of the rest of it. We’re not the same as everyone else. [LGBT people] have a culture and we are different, but we live in a context. What this play is able to do is show gay lives in context in a tiny rural part of Georgia. I don’t think anyone has done that,” Mount says.

And consider that this community theater packs a punch. Since “Headwaters” launched in 2007, the annual production has raised more than $250,000 for the Sautee Nacoochee Community Association, which is the non-profit group that operates the cultural and community center. The production also receives state grants and funding from the National Endowment for the Arts.

But really, this is so Outside the Perimeter. Mount’s pitch? “Didja Hear?” can be the focal point for a day trip exploring north Georgia.

“It is something really brave and a remarkable story. This is a beautiful place and it is an easy and fun day trip. It is a wildly entertaining show on the most gorgeous set we’ve put in place,” Mount says.

“Headwaters: Didja Hear?” opens on July 5 with shows Thursdays through Sundays until July 22. Tickets are $16 to $21 and be reserved online.