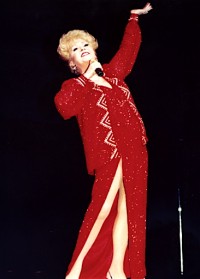 Whether you think of her as Princess Leia’s mom, “The Unsinkable Molly Brown,” her cameos on “Will & Grace,” or a consummate Hollywood hoofer, six decades of entertainment in one little body are headed to Atlanta.

When Debbie Reynolds takes the stage at the Ferst Center for the Arts on Sept. 11, she does so with the charisma that comes with a lifetime career of ups, downs, Oscar and Emmy nominations, and some of the highest critical acclaim for her live shows.

Some say “Trooper” and “Living legend” almost don’t do her justice, and that sentiment goes double for gay fans of the diminutive dynamo. That’s why Project Q Atlanta teams up with the Ferst Center to offer a pair of tickets to the Sept. 11 show.

It’s easy to win. Just {encode=”[email protected]” title=”e-mail us”} with the subject line “Debbie Reynolds tickets” by Friday, Aug. 20 at 6 p.m., and we’ll e-mail the randomly selected winner with details to set you up. To qualify, be sure to include your first and last name as well as the address on your ID in the e-mail. They’ll need it at the Will Call desk. As a reminder, we will never share your e-mail or postal address with anyone and won’t use it again after this contest.

So whether you’re thinking Hollywood musicals like “Singin’ in the Rain,” the jilted ex at the hands of Liz Taylor, a Vegas showstopper, or a wise-cracking grandmother, this is your chance to see Debbie Reynolds for free.

UPDATE: This contest is closed. Congratulations to David Goldman and Jay McMinn. Enjoy the show!