Uneven, but enough to ‘Love You Phillip Morris’

Virtually the rest of the world has seen it already—or had the chance to. Heck, international airline flights have played it. The gay comedy “I Love You Phillip Morris” with Jim Carrey and Ewan McGregor finally opens in Atlanta Friday.

If the long wait isn’t entirely worth it, it’s still an audacious, goofy movie. Based on a real story, “Phillip Morris” (photos) stars Carrey as Steven Russell, a police officer who is happily married, regularly goes to church and has a happy hetero life.

After a crash that could easily have killed him, Steven decides to be true to himself and come out. He moves to Florida and takes a lover. Realizing that being gay is hardly inexpensive, he takes to con games and winds up in prison, where he meets the titular Phillip Morris (McGregor), convincing his fellow inmate he is a lawyer. 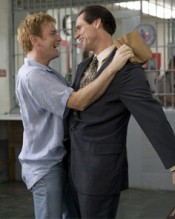 When they are both sprung, Steven embezzles money at a new job to keep the pair living the high life. Eventually, he is caught and sent back to the can, at least until his mind can spin another way to get free.

The real-life Russell is serving a lengthy sentence and is apparently under daily supervision. In all, he manages to escape from the Texas prison system four times. His story is absorbing material, almost unbelievable at times. First time directors Glenn Ficarra and John Requa tell his tale admirably, with some awfully funny and dark moments, especially a subplot where Steven gets sick in prison.

Yet the film is a lot like Steven: constantly in motion, rarely if ever coming up to breathe. The script moves at a lightning pace. One moment, Steven is happily married, and three minutes later—poof –he is tricking with a man and in love in gay ol’ Florida.

Likewise, he meets Phillip Morris in jail, and they are a couple not long afterwards. McGregor’s meek Morris is a nice contrast to Road Runner Steven, and some of the actor’s finer moments have him trying to make sense of his partner. Carrey is game, too. He’s always been an inventive, undervalued comedian and is well suited to the character. He can do wonders with his face alone.

But Ficarra and Requa simply cannot figure out if they are trying to make some anarchic indie comedy or a crowd-pleasing “Ace Ventura” sequel. The actors often have some sweet moments together, but many scenes seem rigged for an automatic comic payoff.

Had they calmed Carrey down and made the film less manic and more spontaneous, more emotion would be onscreen, especially between the two men. As it is, Steven comes across as charismatic but remote. It’s easy to chuckle at his shenanigans but harder to care about the central relationship.

The gay subject matter is handled matter-of-factly. There is not coy interplay between Carrey and McGregor, and luckily, the much buzzed-about sex scene with Carrey is still intact. The less you know about that moment the better, because it’s one of the film’s comic highlights (and one reason the film was stuck in distribution limbo for a long while). Let’s just say that Steven obviously went to the Jeff Stryker Academy of Ass Plowing.

Almost two years ago, the film bowed at Sundance, but never found a U.S. distributor. It did earlier this year and after numerous delays, it switched hands and is finally seeing the light of day.

Despite being uneven, “Phillip Morris” is still the gayest thing to hit the cinema this year. Unlike Bradley Cooper and Eric Dane in “Valentine’s Day,” these two are actually a real screen couple. Lower your expectations a bit, and you’ll find much to like here.

“I Love You Phillip Morris” is now in area theaters.