No one throws a birthday benefit for HIV/AIDS quite like Mary Edith Pitts. Saturday’s underwear show and a souped-up Sunday Spectacular are topped only by Pitts’ fundraising goal: $60,000 for Jerusalem House and Grady IDP.

With a fundraising prowess that makes many a non-profit envious, Pitts (top, bottom photos) again donates all tips and proceeds from both nights to her two beloved charities. Most recently, the donations diva celebrated 20 years in drag in May, and put nearly $5,000 in the two HIV/AIDS service agencies’ coffers.

Five grand? That was just a little warm-up. Going into Saturday’s Frank Dandy Underwear Fashion Show, nearly $25,000 is already on the books for this round of giving.

“Since underwear has become one of the more popular items we sell in our store, we’re pleased to show off the new Frank Dandy line to customers – and help two very worthy charities that benefit gay men and women in the process,” say Brushstrokes owners Mark Jackson and Tom Schloeder in a written statement.

The show is shaping up to be off the chain, at least partially due to Pitts “personally” inspecting many a package of the event’s male models. In-person attention is required, she says.

“It is written in their contracts… especially the rumps, they require a lot of adjusting, er um, Yeah!,” Pitts says. “I think everyone will be pleasantly surprised by the models.” 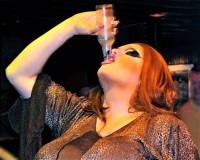 Besides expectations of “prominent VPL” (visible panty lines) and “definitely a good time,’ Pitts jokes in typical over-the-top fashion that we might even see her famous oversized booty in Frank Dandy fashions.

“Absolutely! My thong will be front and center with my camel toe,” she says.

Ahem. With that in mind, let’s move on to Sunday’s supersized Birthday Spectacular Fundraiser, which includes a huge raffle, silent auction, giveaways and more of Atlanta’s favorite performers than should be legal.

Brushstrokes again gets in on the action with donations of various prizes for the benefit, including a healthy donation along with Prescription4Love.com for the big raffle prize: a scooter. Be there for other donated prizes from the likes of Shane Garner Photography, Fleming’s Steakhouse, Burkhart’s and many others.

“I’m really excited about Sunday’s Fundraiser for a lot of different reasons,” Pitts says. “First and foremost, it’s gonna be a great show. All entertainers are donating their time and tips.”

Rarely seen together all in one show, the queens of hearts come out for Pitts, from other venues and from out of retirement. Look for performances by Niesha Dupree, Wild Cherry Sucret, Tina Devore, Alicia Kelly, Ashley Kruiz, Savannah Leigh, Princess Charles, Brent Star, Regina Ryan, Destiny Brooks, Amariah, Anastacia, Shavonna B. Brooks, Trashetta GaLore, Diamond Monroe and more.

If just being there isn’t enough, you can also help reach the $60,000 goal by bringing your tax deductible check payable to Jerusalem House or the Grady IDP. Credit card donations are also being accepted.