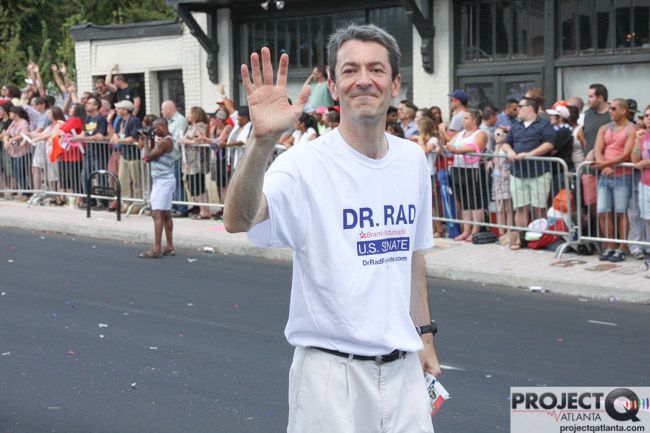 An underdog Democrat candidate for Georgia's open Senate seat fully backs gay marriage, a full-throated endorsement that makes the nuanced position of the leading Democrat in the race look that much weaker.

Branko Radulovack, a psychiatrist and one of Atlanta's Top Docs, didn't mince words when it came to gay marriage in an interview with Atlanta Progressive News.

Do you support same-sex marriage?

I don’t think our government should be in the business of discriminating against anyone because of their beliefs.  As a happily married man, I understand the desire to make a lifelong commitment to one person.  I see no legitimate reason to deny that right to someone else.  Pope Frances said, “Who am I to judge?”  That’s a strong statement and I agree with it.

That endorsement mirrors what Radulovack offers on his campaign website.

As a board-certified psychiatrist, I am confident that sexual orientation is genetically-determined, rather than a matter of choice or predisposition.  As a result, I see no basis for judging, condemning or discriminating against a person in response to his/her sexual orientation.  By extension, I believe our government should not discriminate on the basis of a genetically-determined trait (be it race, ethnicity, sex, or sexual-orientation).

Therefore, just as the rights and privileges associated with marriage were extended from same-race heterosexual couples to interracial heterosexual couples (in 1967), I believe they should now extend to same-sex couples of any race who wish to make a lifelong commitment to one another.

As a Christian, I acknowledge every church’s right to accept or deny a government-authorized marriage as a sacrament.  But I also agree with Pope Francis who, when asked recently about homosexuality, responded, “Who am I to judge?”

Compare Radulovack's clarity with the more nuanced position of Michelle Nunn, the non-profit leader and leading Democrat in the race. The pair, along with former state Sen. Steen Miles, face off in a May 20 primary.

Nunn backs gay marriage personally but favors leaving it to individual states to decide the issue.

She supports it personally, but believes it should be left to the states, she said.

But Nunn's take on marriage equality falls behind even the “bald-headed fat redneck” that now leads the state's Democratic Party. She could have gained some insight on gay marriage during the Atlanta Pride parade last October. But she skipped it. Radulovack marched in it with supporters (photo).