Um, no – the Eagle remains open and pouring 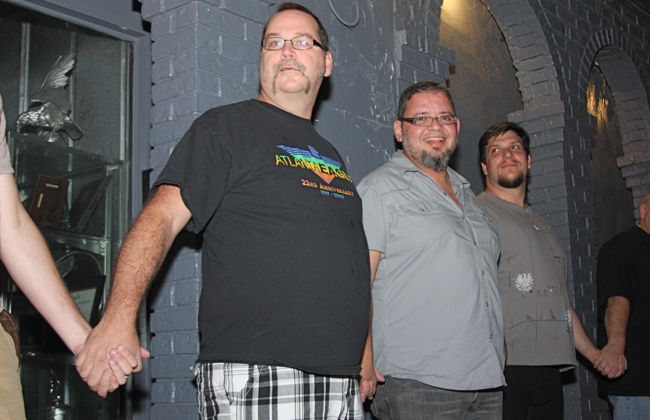 It’s no secret that the Eagle has struggled financially since the city’s botched police raid more than a year ago. But recent rumors of the bar’s demise are greatly exaggerated, its owners say.

Longtime gay Atlanta food critic Cliff Bostock took to the Omnivore blog at Creative Loafing to lament the departure of Chris Lopez from the Eagle. The popular bartender – one of the Eagle 8 arrested and later cleared in the September 2009 raid – was laid off from his job at the bar this week. But the blog also repeated an apparent rumor that the bar would close by year’s end.

That’s not the case, according to co-owner Richard Ramey, who told the GA Voice that the bar closing by the end of the year is “not necessarily true.” Robert Kelley (photo left), the bar’s other owner, posted this to Facebook on Friday: “The rumor that the Eagle is closing is not true. This has been getting said sence [sic] the raid. And we are still here.”

Lopez, for his part, had this to say on Facebook about his departure from the bar on Thursday:

All good things must come to an end…just wanted to say thank you to all the great customers and friends I have met at Atlanta Eagle! It has been a hell of a ride the past seven years and I look forward to seeing everyone out and about – heck there is always a shot of Jager, can of PBR or maybe a High Life with my name on it!!

The Eagle, which marked the first-anniversary of the raid with a small rally in September, has swatted down rumors of its demise before. Kelly talked about the toll the raid took a few weeks after the event; Ramey did so earlier this year when the bar’s landlord pursued a zoning request for the property.