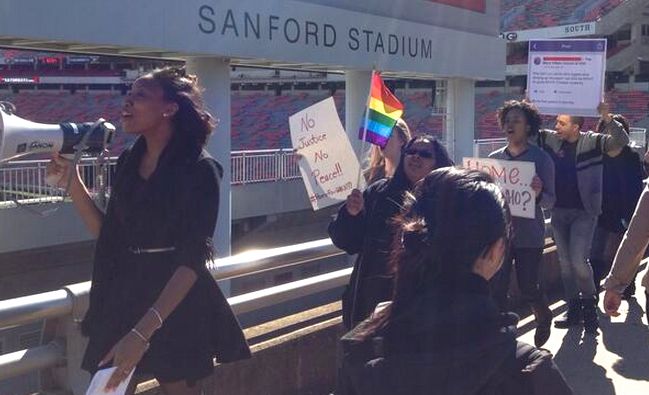 A troll who took over the Facebook account of a UGA student used it to aim anti-gay and racist comments at two student organizations, prompting an outcry on campus and a protest march for Homecoming weekend.

Matthew Robert Williams told UGA police that “an unknown person” used his name to post to the Facebook pages and Twitter accounts of the LGBT Resource Center and the Black Affairs Council on Nov. 3. The messages included “burn in hell faggots” and “Why can’t you dumb dirty niggers stop stinking up the place? Let UGA be RIGHT for good WHITE Christian students.”

UGA Vice President for Public Affairs Tom Jackson said he hopes this one isolated incident will not throw a shadow on the strides UGA has made in previous years.

“You know, I’m not aware of this happening with any great frequency,” he said. “I would say I would hate to see the misguided actions in this particular incident cloud the advances that have been made over the years in diversity and inclusion on this campus.”

Students were more skeptical about the campus environment for minority students. After all, it's the same place where UGA President Jere Morehead said nuh-uh to health benefits for domestic partners.

“There’s no place like homecoming” at the University of Georgia, but for Steven Edwards and other students, recent acts of cyber hate speech beg the question, “home for who?”

“We like to pretend this is an accepting university, but it’s not,” said the sophomore cognitive science major from Duluth.

Some 150 students took part in a march on Friday protesting the offensive posts.