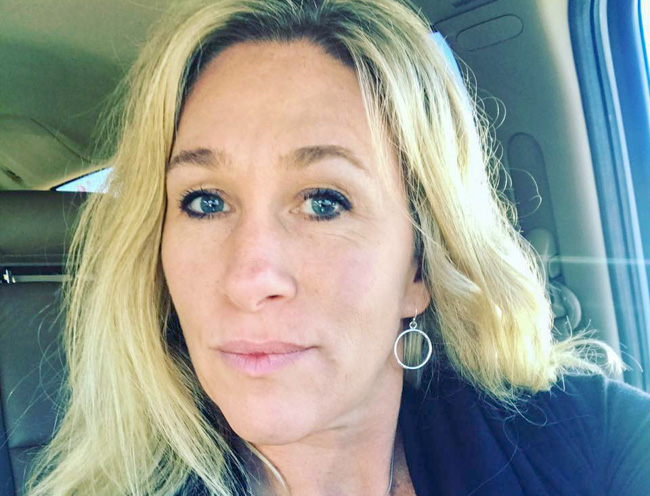 A candidate for a U.S. House seat in metro Atlanta said a Drag Queen Story Time event in Alpharetta was an “attack on our children.”

Construction company owner Marjorie Taylor Greene made the comments in a Facebook Live video she posted during the April event. Greene later removed the video, but Project Q Atlanta obtained a copy on Wednesday. Greene (photo) hopes to win the Republican primary to then challenge U.S. Rep. Lucy McBath in the 6th Congressional District race next year.

The 90-minute video includes footage of Steven Igarashi-Ball, who performs under the name Miss Terra Cotta Sugarbaker, reading to children. Greene then continued filming outside the library after the event.

“I do not hate or have any ill will against that man. I just don’t like that gender confusion being put on young children,” she said to viewers. “This is the type of thing that if they want to do it in their private stores and their private homes, but in this community in Alpharetta, you have a Baptist church across the street with a Christian school. You have a Methodist church with another Christian school.”

“That’s the abomination that just read four children’s books to children in our public library here in Alpharetta, Ga.,” she said.

“In today’s political climate, words have more power than ever before,” he told Project Q on Wednesday. “We should be seeking leadership that wants to unify our citizens, and that can be representative of the whole of our cities, states and country. Divisiveness and hate speech are not political platforms.”

“There is no room in elected office for someone who espouses such transphobic and homophobic hate speech,” he added.

Greene did not respond to Project Q’s questions about the video.

The Southern Poverty Law Center uncovered several offensive Facebook posts by Greene on Aug. 16. She attacked transgender people in one of them, saying, “Trans does not mean gender change, it just means a gender refusal and gender pretending! Truth is truth, it is not a choice!!!”

A handful of protesters from a group called MassResistance attended the Drag Queen Story Time event. One member of the group refused to show her face on Greene’s video because she was afraid she’d lose her teaching job. Greene urged viewers to join the group, which the Southern Poverty Law Center labels an anti-LGBTQ hate group.

“We have to start standing up and stopping this attack on our children,” she said. “It’s evil.”

Greene ran into a camera crew from Denmark that was covering the event. Then she read a comment from a viewer who wrote, “This way, Denmark news can make it seem homosexuals are normal and continue to force their perversion.”

At one point a woman walked up and asked Greene what’s going on.

“Oh yeah, they’re brainwashing our kids to believe that gender is whatever you want to believe,” Greene said.

The woman laughed and walked away.

She stopped the video at another point to film a woman walking by who was wearing a hijab.

“You see that right there? Our library is full,” Greene said as the woman walked away. “No.”

Greene noted that two other protesters were Christians.

Toward the end of the video, Greene confronts someone who she claimed was the library’s branch manager. The employee declined to comment.

“You’re not on a gag order,” she said. “You’re an employee of mine, so you owe me an answer on why you allowed this to happen in my library.”

The employee walked away.

Greene urged viewers to flood the Alpharetta Library with calls and emails complaining about the event. She also urged viewers to find out where other Drag Queen Story Time events are taking place across the country and stop them.

An anti-gay Sandy Springs business person dropped out of the 6th District race earlier this month after publicly identifying himself as a white nationalist. Donnie Bolena reentered the race on Sunday as an independent, according to the AJC.

Former U.S. Rep. Karen Handel, who has a lengthy anti-gay track record, state Sen. Brandon Beach and political newcomer Nicole Rodden are facing off against Greene for the Republican nomination in the 6th District race. The winner will face McBath – an LGBTQ ally – in November 2020.