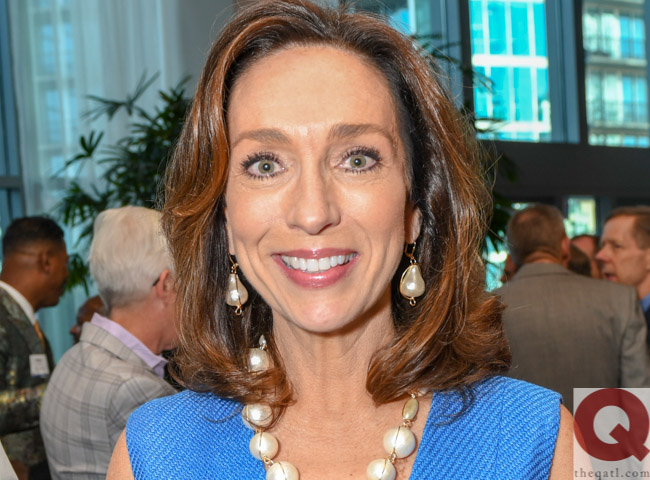 Teresa Tomlinson – the former Columbus mayor now running for a U.S. Senate seat in Georgia – headlined a record-setting Evening for Equality gala, delivering a blistering critique of “the lunacy and bigotry” of the Trump administration.

The Georgia Equality fundraiser and awards show at the Loews Atlanta Hotel in Midtown on Saturday drew a record crowd – about 450 people, 100 more than last year featuring gubernatorial candidate Stacey Abrams – and raised a record $160,000. Out WSB-TV meteorologist Brian Monahan emceed the affair, which included a slew of political candidates and elected officials.

Tomlinson (top photo), who jumped into the 2020 Democratic primary for U.S. Senate in May, talked about writing a letter to the editor to the Columbus Ledger-Inquirer against a 2004 amendment to ban same-sex marriage in Georgia.

“I didn’t care if I was ever invited to another dinner party or placed on another Christmas card list or elected to anything,” she said. “And though that measure shockingly passed with 76 percent of the vote, they could kiss my ass if they thought I would stand down for this.”

Tomlinson, who was introduced by her lesbian sister Tonya Pike, spoke of leaving the Republican Party in her early 20s after seeing people willing to smear a political opponent’s sexuality.

“I knew that if a person went to the Pandora’s box of bigotry in an effort to acquire power, it would be effective and addictive,” she said. “I was right, and here we are today in a pitched battle for our civic souls. We are constantly being pitted against one another so that others can acquire power.”

Tomlinson said a wave of same-sex marriage bans on the ballot across the country in 2004 were put there to drive turnout for President George W. Bush, whose approval ratings were low in the middle of an unpopular war. She said the same tactic is being used today with a number of abortion bans across the country being introduced “to help salvage the shipwreck that is our current presidential administration.”

Tomlinson also criticized “the lunacy and downright bigotry being thrust upon us from Washington, D.C.” She referenced the Trump administration refusing to allow embassies abroad to fly rainbow flags during Stonewall Month, banning transgender people from serving in the military, supporting a rule allowing healthcare providers to refuse medical treatment to LGBTQ people and promoting anti-LGBTQ judges.

“We can and we must do better, and it matters who we send to Washington to lead,” she said.

Tomlinson is the only major candidate in the Democratic primary. But Sarah Riggs Amico, who lost a bid for lieutenant governor in 2018, is expected to announce her candidacy soon. Former 6th Congressional District candidate Jon Ossoff is also reportedly exploring a run. The winner of the Democratic primary in May will face U.S. Sen. David Perdue in November 2020.

Jeff Graham, executive director of Georgia Equality, said the group spent $200,000 on the 2018 elections to support pro-LGBTQ candidates. He also noted accomplishments from this year’s legislative session, including beating back anti-LGBTQ “religious freedom” legislation, an LGBTQ-inclusive hate crimes bill passing the House for the first time and bills becoming law that will fight HIV.

Graham (second photo right) hailed Doraville City Councilmember Stephe Koontz for working to help pass LGBTQ-inclusive nondiscrimination ordinances in cities around metro Atlanta. Dunwoody was the latest to do so.

“[After] Dunwoody [being the latest to pass], there are now 100,000 more Georgians that live in communities that protect them against discrimination based on sexual orientation and gender identity as well as categories such as race, religion, age and sex,” Graham said.

But he continued his call for the state to pass an LGBTQ-inclusive civil rights bill.