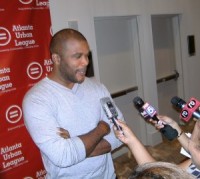 Oh, how we love Tyler Perry. Though he won’t come out publicly — probably concerned that the religious portion of his fan base will shun him, rather than use it as a teachable moment — he is wont to tell others how to act.

On Saturday, Perry attended an Atlanta Urban League luncheon. When a reporter asked Atlanta’s own entertainment giant if he had any grooming tips for black men, Perry offered this quip:

No doubt Perry meant after he’s done with them.