Tyler Perry has way more money than you 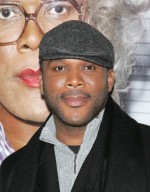 Tyler Perry is one rich bitch. That the Atlanta director has money is of little surprise — he sits atop a production studio in south Atlanta that spits out movies and TV shows like a Chinese sweatshop churns out shoes for Nike.

But that he has this much money — Perry made $75 million last year — means the glass closet in which he lives is, well, a really, really nice one. It’s in Buckhead, of course.

Perry’s bucks put him sixth on the Forbes list of the 15 highest-paid men in Hollywood, behind George Lucas ($170 million), Steven Spielberg ($150 million), Jerry Bruckheimer ($100 million), Jerry Seinfeld ($85 million) and Phil McGraw ($80 million). And from what we can figure, that also makes him the highest-paid closet case in Tinseltown.

He wants you to pull your damn pants up, too. We wonder if that applies to one of his leading men, Terrell Carter, whose own glass closet came crashing down around him recently.