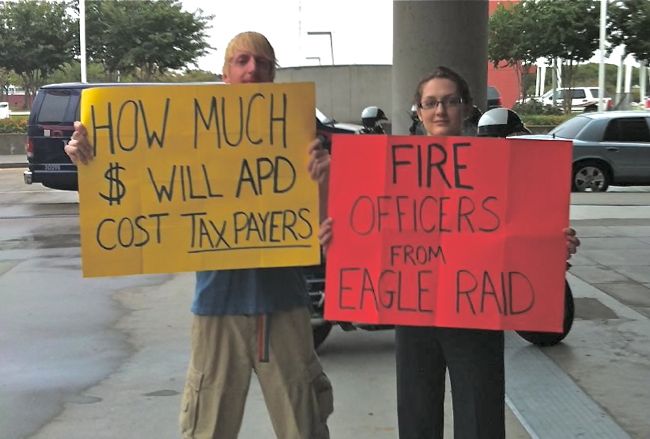 Gay activists from the Queer Justice League, likely unhappy with the doughnut selection at a cop-tastic breakfast fundraiser on Tuesday, protested when Mayor Kasim Reed took to talking.

Or maybe the civil disobedience was over this whole Eagle raid shitstorm.

Either way, once the two activists — Art Izzard and Laura Gentle (photo) — stood and unfurled their signs, officials with event organizer Atlanta Police Foundation asked them to leave their “Crime is Toast Breakfast.” Guess they weren’t impressed with the sloganeering: “How much $ will APD cost taxpayers” and “Fire officers from Eagle raid.”

“We are still waiting for the mayor to take the ‘swift action’ to resolve issues stemming from the raid that he promised several years ago,” Art Izzard of the Queer Justice League says in a press statement after the breakfast.

Atlanta police spokesperson Carlos Campos tells the GA Voice that the protesters didn’t disrupt the breakfast and that they complied with a request to leave. That’s better treatment than the Eagle raid patrons received.

The Eagle raid led to two investigations that provided sweeping indictments of police conduct, the firing of six officers and disciplinary action against others, and led police Chief George Turner to task a newly-promoted deputy chief to clean up the mess. But some activists, including Gentle, want more cops fired.

The Queer Justice League says Tuesday’s protest is part of a ramping up of actions that will include a Nov. 1 town hall about the Eagle raid that’s scheduled to include Reed and Turner. It’s not an idle threat. QJL tangled with state Rep. Bobby Franklin over an anti-gay rant and with U.S. Sen. Saxby Chambliss over a staffer’s anti-gay threat. Taking on Chick-fil-A didn’t go so well, though.

Ironically, Reed’s comments during the breakfast on Tuesday included mentions of his work on LGBT issues. A spokesperson for Reed could not be reached on Tuesday.