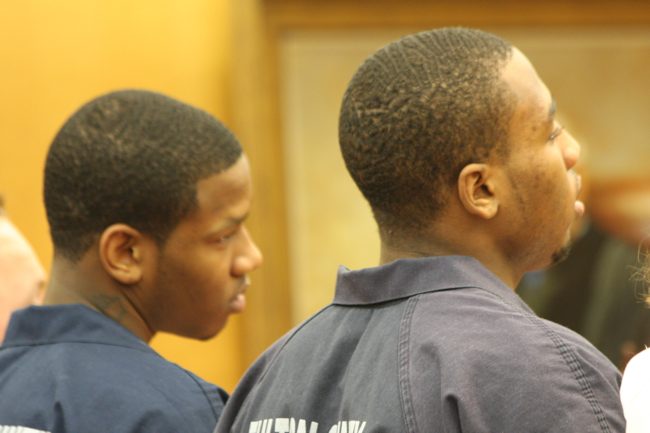 READ MORE | Hate crime charge next in Atlanta gay beating? Two men pleaded guilty on Tuesday to attacking a gay man in southwest Atlanta, yelling anti-gay slurs at him and recording the attack that prosecutors called a hate crime. They now face up to 75 years in prison. The two men -- Dorian Moragne, 19, and Dareal Demare Williams, 18 -- faced trial on Tuesday in Fulton County Superior Court for the Feb. 4 beating of Brandon White. The men attacked White as he left a grocery store in the Pittsburgh neighborhood of Atlanta. Moragne (photo right) and Williams (photo left) pleaded guilty after a sometimes contentious 40-minute hearing in which Moragne balked at being described by a prosecutor as a member of the Pittsburgh Jack Boys gang. The two men faced four counts: solicitation of street gang activity, robbery by force and two counts of aggravated assault. Superior Court Judge T. Jackson Bedford delayed sentencing the two men until a hearing in July. But Bedford’s patience wore thin when Moragne hesitated to plead guilty to the gang-related charge. “I am accepting these pleas and I want to make sure that you guys know what’s going on and are guilty,” Bedford said. “I will get a jury down here and try you. I am not messing around with you.” The pleas were accepted after a proceeding with several false starts and unusual delays that pushed four hours past its scheduled start of 9:30 a.m. Moragne and Williams are two of four men indicted and charged in the attack. Christopher Cain was also scheduled to appear in court on Tuesday, but the public defender assigned to Cain had a family emergency and was unable to attend. Jay Abt, the not-so-publicity shy attorney for Moragne, apparently fell through his ceiling over the weekend, broke two ribs and was unable to appear in court. The proceedings were delayed until other attorneys could fill in. “We’ve heard a lot of excuses but I’ve not heard of one falling through the ceiling,” Bedford said. A fourth man charged in the attack, Javaris Bradford, has not been arrested, according to the Fulton District Attorney’s office. All four men were indicted in February; Cain, Moragne and Williams were later arrested. White, the victim of the Feb. 4 attack, sat quietly in court with two advisers during the hearing. He listened as Assistant District Attorney Gabe Banks detailed the attack before Moragne and Williams pleaded guilty. Banks said Cain initiated the attack and struck White first after Cain alleged that White made a sexual advance. White has adamantly denied knowing the four men, even though some LGBT activists allege otherwise. But Banks said there is no evidence that White made a sexual advance at Cain. After Cain struck White from behind, Banks said, Moragne and Williams began hitting him with their fists, stomping on him and kicking him. "This was all being videotaped and they were saying on the video, 'No faggots in Jack City' and this was clearly in the state's view, a hate crime," Banks said during the hearing. Moragne also threw a large tire on White and took his cellphone, Banks said.