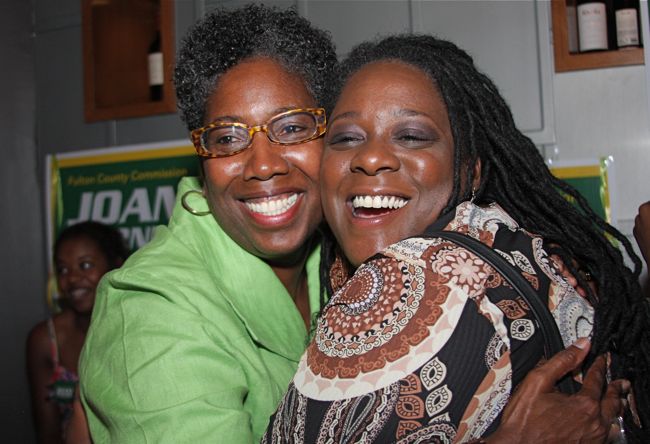 Two lesbians will face one another in a runoff for the District 6 post on the Fulton County Commission next month, after a slim 168 votes separated them in the primary election on Tuesday.

Waites (second photo) and Garner (top photo left) will face one another on Aug. 10; state law requires a candidate to receive 50 percent of the vote to win without a runoff. With no Republicans in the race, the runoff will decide the election. Waites or Garner will make history as the first openly gay member of the Fulton County Commission.

“We are running one campaign,” Waites said Wednesday. “We are very proud of that. We are running a campaign that speaks to every single person. Our message has not changed. I am excited.” 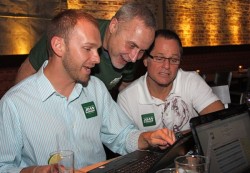 Waites, who has run for office six times since 2001, said Wednesday that she was the underdog in the race. She credited Garner for running “a phenomenal campaign,” but criticized the LGBT groups – Atlanta Stonewall Democrats, Georgia Equality, and Gay & Lesbian Victory Fund – for their endorsements of Garner.

“I was very disappointed to see that those groups made endorsements prior to candidates being qualified. We never had the opportunity to vie for those endorsements. Clearly everyone wrote us off in this race. They recognized me in 2008 – those endorsements can’t be erased. I am very proud of those,” Waites said.

All three groups endorsed Waites in her unsuccessful 2008 campaign for the state House, but backed Garner in this year’s Fulton race. Waites lists the two-year-old endorsements on her current campaign site, but criticized groups that endorsed Garner in 2010 as “special interests.”

“I am so proud that every endorsement we have has come from real people. It hasn’t come from special interest groups or elected officials. I am truly the people’s candidate,” Waites said.

But her campaign site doesn’t list any endorsements Waites received in the current campaign. Waites did not publicly court LGBT voters during her campaign through public appearances or fundraisers, but said Wednesday that she has reached out to her gay and lesbian voters in the district.

“In my community, we have a huge population of LGBT people. We did a number of things via email – those are things we are very proud of. We did a heavy amount of outreach. This is a very diverse district, and you can’t win without reaching out to the LGBT community. We will continue to fight for their support,” Waites said. 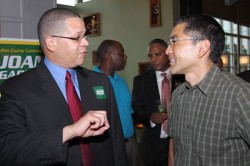 Garner, who has a long history of LGBT activism, courted LGBT support during a June 22 fundraiser and with a campaign staff that includes several gay staffers in key roles. On Tuesday, her Election Night watch event at Serpas on Auburn Avenue in the Old Fourth Ward attracted several LGBT activists and state Rep. Simone Bell (top photo right). The state lawmaker, who coasted to re-election on Tuesday, made history last year when she became the first African-American lesbian to win election to a state legislature in the U.S.

On Wednesday, Garner thanked her LGBT supporters and pressed them to continue backing her campaign in the runoff.

“I just want to thank everyone who supported my campaign, who supported me and who has supported me over the years,” Garner said. “They know that I carry our issues with me wherever I go. I appreciate the support and I’m asking for their continued support, and I know that they’ll help me get the victory.”

Garner credited Waites’ past campaigns and her high name recognition with providing a boost in the Fulton race.

“I think we were all pretty stunned at the turnout. I guess it pays off to run consistently that way. She’s run a number of races. People know her name. She knows how to run a campaign. I still feel really good that I was neck-and-neck with her and haven’t run before,” Garner said.

Waites ran for the Atlanta City Council three times – in 2001, 2005 and again last year, according to the GA Voice. Waites ran for the General Assembly in 2002 and 2008 and for Fulton County Commission chair in 2006.

Both candidates said Wednesday that they are gearing up their campaigns for the runoff in three weeks.

“We’ll make sure we are knocking on more doors. I’ve been out there – we worked a very good campaign, a very strong campaign. We just need to ramp it up a couple of notches more,” Garner said.