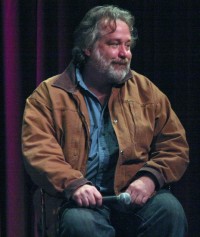 Gay performers Chase Davidson and Taylor Trensch always fantasized about being part of a Broadway musical, but neither realized they’d make their touring debuts in a show as big as “Spring Awakening.”

Debuting in Atlanta on Tuesday night at the Fox Theatre, “Spring Awakening” is not a show for the “Sound of Music” crowd. Based on a late 19th-century German play of the same name by Frank Wedekind—actually banned for a while—the show deals with such heavy themes as abortion, rape and child abuse as its cast of teenagers discover their sexuality.

Two of those characters are boys experiencing love with each other.

Featuring a score by musician Duncan Sheik, “Spring Awakening” won eight Tony Awards, including Best Musical of 2007. One of its producers is openly gay actor Tom Hulce (top photo, think the lead in “Amadeus”), and she-of-the-golden-pipes Lea Michele of TV’s “Glee” was in the original Broadway cast.

Davidson (second photo), part of the show’s ensemble and the understudy for the character of Moritz, is originally from Dallas, Georgia. One of the notable local shows he appeared in was Onstage Atlanta’s “Victor, Victoria.” He attended the Boston Conservatory and was looking for a gig when the “Spring Awakening” opportunity came up.

“I wasn’t dead set on this show, but I look like I’m 14 and I have a pop rock voice,” he says. “This is also one of the most successful musicals around.”

Davidson doesn’t consider the show overly racy, but he realizes that others might, especially since it involves teenagers. 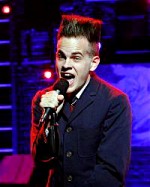 Trensch (bottom photo) plays the character of the troubled Moritz.

“Moritz is a teenager who is tormented by all the changes his body is going through,” he says. “His parents will not provide the answers to the questions he has. Moritz is a nervous wreck.”

When he saw the show a few years back, Trensch knew it was a production that would speak to musical theater fans as well as young audiences.

“I was also stoked by the music,” he says. “So many shows call themselves rock operas, but this is it.”

One initial disappointment, however, was the gay subplot.

“At first, I didn’t think the gay angle was all that prominent,” he says. “I was a little disappointed, but the more I thought about it, the more it stayed with me. It’s a different kind of love.”

Like Davison, the Southern Trensch (he went to school in Elon University in North Carolina) has seen shows at the Fox but is looking forward to his first time performing there.

To welcome the show to town, party promoter Bill Kaelin plans the big gay opening night party, “Rude Awakening,” with DJ Hang the DJ and singer Barry Brandon on Tuesday at the Livingston across the street from the Fox.

“Spring Awakening” opens at the Fox Theatre on Tuesday, March 9 and runs daily through March 14. Two showtimes are scheduled for Saturday, March 13 and Sunday, March 14. Buy tickets online or call 1-800-982-2787.

Check out this preview video to get a taste of the show: