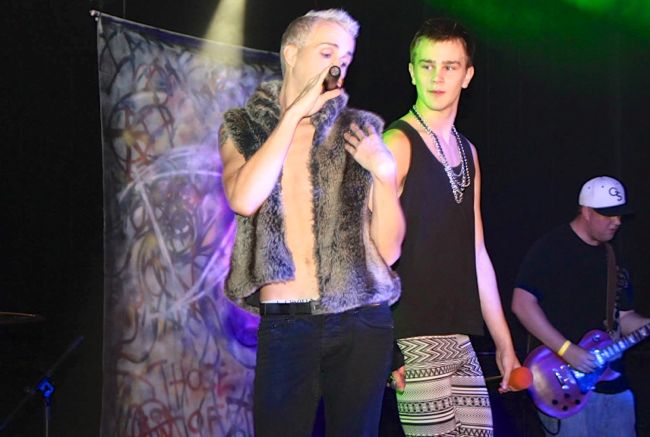 It's like a Madonna v. Lady Gaga fight, but between two gay Atlanta singers and on Facebook. And this feisty public squabble comes with its own remix and a play-by-play from a nightlife aficionado.

So much for that duet singer Dylan Michael (photo left) and rapper J. Tyler (photo right) performed in July during the release party for Michael's “Vandalized.” On Monday, the virtual gloves came off as the pair let innuendo and insults fly. It's not the first time the pair has taken aim at one another.

What seemed to fan the flames in this recent flap was a quick post by Ellingwood late Sunday or early Monday. It's since been deleted from his Facebook page but the sting didn't wear off so quickly.

I'm sorry, sweetie, autotune is not a genre of music. That's why you'll always be a Pride gig.

Michael responded. So did fans and friends in the comments below.

– Congrats on being arrogant enough to justify alienating all the other artists with your ego. I am sure when the artist digs and jabs, it does wonders in the hip-hop industry, but for everyone else it comes off as tasteless and classless. However, I appreciate your never ending interests in my career. Perhaps you should work on yours instead of focusing your attention on my successes.

Justtin Tyler Ellingwood Daniel, first off, you've hated me ever since Project Q wrote an article about me. I don't know you, you damn sure don't know me. So shut the fuck up, for the THIRD time already.

And David, that is well said. Thank you for saying it. Also, I think that both of us should've handled it differently. It hasn't been neutral ever since I clocked him about the song by Warren. But with that being said, when one goes and tries it, odds are they'll get it.

Daniel English Justin Tyler Ellingwood you are pretty well right. I don't like you. You are arrogant and insufferable. You do not control anyone here. And it seems that people do agree with me on your behavior. Most people with the intellectual capability higher than a wood beetle realize what you're about very quickly. You've shown us time and again what you're about. You are essentially the gay musical version of a Kardashian.

Justin Tyler Ellingwood I'm arrogant? That's proof that you OBVIOUSLY don't know me. You've hated me from the jump, but it's okay, though. I don't lose a minute of sleep over it. I don't know what your problem is with me, and I don't care to know.

And then some more back-and-forth between Michael and Ellingwood. First, the singer.

I understand that people may have their opinion about me, but I am me. I create the music I want and I support the LGBT community that I am proud to be a part of. Me doing pride events all across the country is one of the biggest honors of my life so far and I would never consider that a downfall or a set back to my artistic vision as a gay artist. I admire all of the local talent and what they bring to the table, but I will not indulge in online shade throwing for the hell of it. I am going to continue doing my thing and with that comes haters and lovers…but I am being true to me and that is all that matters. I will always be myself and I'll always be proud of how far I have come not knowing where I will be in the future.

I supported you, Dylan, even before I moved to Atlanta. I emailed you, and you can see, that I asked you for advice on the scene. But now that I know you, you're nothing but somebody just like me, trying to make it.

Ellingwood also tried to walk back his autotune slam.

That may be how you took it, but when I said he'll always be a pride gig, I meant he won't go anywhere else. I never said anything bad about Pride at all. I'm a supporter of the LGBT community just as well as the next. I'm grateful they have supported me as much as they have. That's the problem with you gays. Everybody takes what they think and hauls ass with it and leaves the facts and the truth behind them. No wonder why the gay scene in Atlanta is so fucked up.

But the pair seemed to be all kisses, with Michael offering congratulations for Ellingwood's upcoming performances.

Congrats! Great to see you getting around!

The early twentysomething Ellingwood does catch your eye rapping without a shirt.

By Monday evening, though, Ellingwood turned the spat into a pitch for a TV show.

LOL. I'm so serious that TV producers need to make a reality show out of the Atlanta gay scene. Do you know how much money is being missed out on? There's jumping the gun, there's shade and T, there's everybody knowing everybody. Isn't that grounds for a show?! #GaysofOurLives

The bitch-slapping prompted gay DJ King Atlas to produce a soundtrack for the affair — “Cold Bitch,” which you can listen to below. Promoter and gay nightlifer Wade Lohan even weighed in with some play-by-play.

Dylan Michael and Justin Tyler Ellingwood aka J. Tyler are at it again via some Facebook status “musical career bashing”.

Stay tuned as your very own Shady Lady gets to the bottom of it. — at The New Lohan Experience Headquarters.

So maybe Ellingwood has something with that TV pitch.