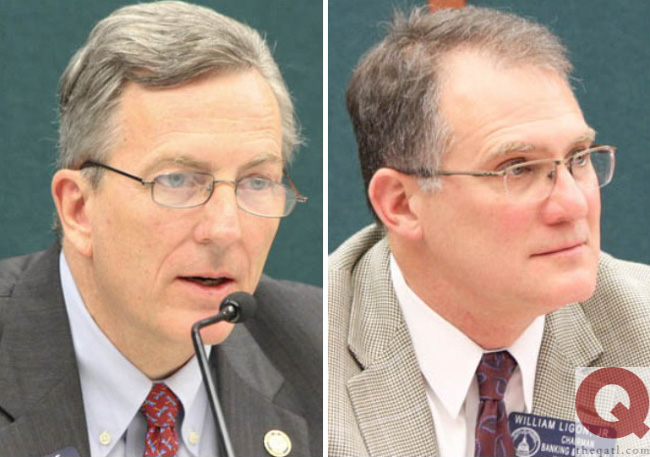 Two powerful voices behind some of the most virulently anti-LGTBQ legislation of the past few years announced they are not seeking re-election to the Georgia Senate this year.

State Sen. Jesse Stone (photo left) of Waynesboro said in February he would not seek a sixth term.

“I believe in limiting terms of office, something I did as mayor,” he wrote on Facebook. “I hope to find future avenues of public service. I appreciate the opportunities and confidence that the voters have entrusted with me over the years. It has truly been a humbling experience.”

“The trust you bestowed upon me was never taken lightly, and I sought to serve in a way that upheld that trust,” he said in a statement. “Now, after a full decade in office, it is time for me to step aside and allow someone else the opportunity to serve our coastal district.”

Julie Jordan, a lesbian school administrator running for a state House seat in St. Simons, told the Brunswick News that she didn’t agree with Ligon on many issues, but thanked him for working on environmental legislation.

“We wish him well in his next endeavors, and we are looking forward to running a candidate to win in that seat in 2020,” she said.

Stone is chair of, and Ligon a member of, the powerful Senate Judiciary Committee, which passed several anti-LGBTQ measures over the last few years.

Ligon hijacked a 2017 adoption bill by adding an amendment allowing faith-based agencies to deny services to LGBTQ people. The Senate Judiciary Committee passed the bill, but it stalled that year. The anti-LGBTQ amendment was stripped the following year and the bill became law.

Ligon introduced a new LGBTQ adoption ban in 2018 with Stone as a co-sponsor. The Senate Judiciary Committee passed it, as did the full Senate. But the bill died in the House.

Stone and Ligon were co-sponsors of another anti-LGBTQ “religious freedom” bill in 2019. It failed to gain any traction.

The Georgia House passed an LGBTQ-inclusive hate crimes bill in 2019, but Stone killed the bill when it reached his Senate Judiciary Committee. The bill still sits in that committee and has failed to move forward.

Ligon introduced an anti-LGBTQ bill that bans “free speech zones” on college campuses in February. Stone cast the tie-breaking vote in the Senate Judiciary Committee to pass the bill in March. It now goes to the Senate Rules Committee, which will decide if the full Senate will vote on it.

Two longtime LGBTQ allies are also leaving the state legislature this year. State Reps. Pat Gardner and Mable Thomas are giving up their seats in Atlanta. LGBTQ candidates have since jumped into those races.

There are now at least 15 openly LGBTQ candidates for the state legislature this year, including the five running for re-election. Qualifying ends Friday, the primaries are in May and the general election is in November.