A 22-year-old Marietta man already facing charges of borrowing his mom's car to pose as a cop and sexually assault a man now faces allegations that he used the same role playing hijinks to assault three other men.

Clayton County police said Tuesday that Andre Pierre Walker's DNA linked him to the other assaults as he sat in jail on charges of impersonating an officer, false imprisonment and aggravated sodomy. Police arrested Walker in July after a man alleged that Walker, posing as a sheriff's deputy, stopped him on Tara Boulevard and searched him for drugs. Then Walker allegedly sexually assaulted the man in the backseat of the car.

Walker apparently borrowed the car from his mother, who was in the hospital at the time of the July attack.

On Wednesday, he was charged in three new assault cases, including one in which he allegedly had forcible sex with a male teen under the age of 17, police said. Walker allegedly employed the same approach: pose as a cop, stop single male drivers and eventually sodomize them.

Detectives of The Clayton County Police Department’s Major Felony Unit, obtained DNA samples from Walker which linked him to other open cases in our county including, the Kidnapping and Aggravated Sodomy of a Clayton County juvenile that took place back in May of this year.

According to reports Walker would usually approach his victims by posing as a police officer, and use that as an excuse to search the victim and then assault them.

At the time of his arrest in July, Walker was out of jail on bond from a 2011 arrest. In that case, Walker and Emmanuel Ababio were accused of sexually assaulting a 16-year-old male in Avondale Estates. Walker was arrested on Sept. 2, 2011 and charged with aggravated sodomy, solicitation of sodomy and contributing to the delinquency of a minor.

Three months later, on Nov. 5, Walker was arrested in Fulton County and charged with aggravated assault on an officer, criminal damage, fleeing from an officer, hit and run, and reckless driving. He was released on $7,000 bond after a week in jail.

Jail records in Fulton and DeKalb identify him as Andre Pierre Walker. A variety of Walker's mug shots from his various arrests are above. Walker's image below is from a court hearing in July. 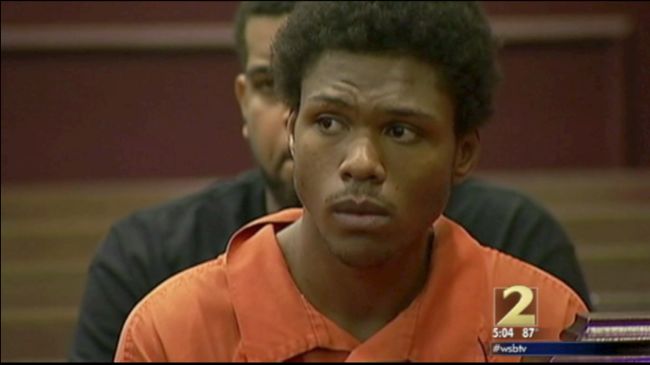