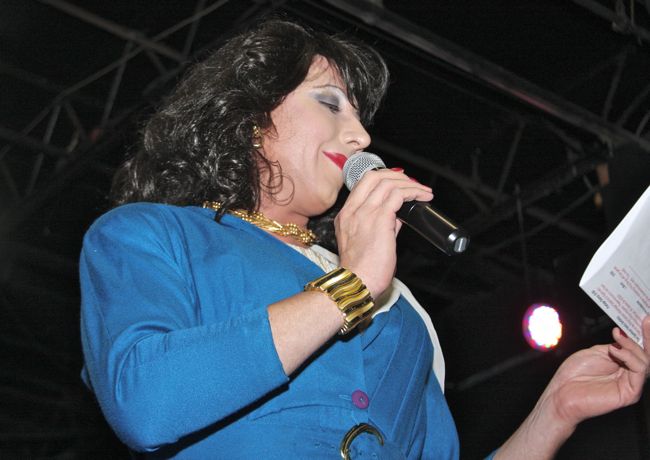 He didn’t mean to, but Atlanta’s favorite gay actor and writer also became prolific at portraying women. As Topher Payne readies for Mother Superior in “The Divine Sister,” here’s how, way beyond drag, he transforms a regular guy into a woman. 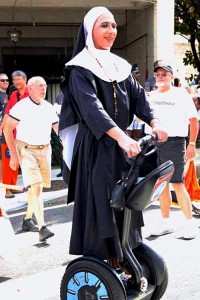 You read that correctly. When the gay-helmed Process Theatre Company opens the hilariously dirty “The Divine Sister” on Friday at OnStage Atlanta, it will be Payne’s 25th role in a dress, or in this case, a habit (right photo from the 2012 Atlanta Pride parade).

Only one of his cross-gender performances was as an actual drag queen (Kevin/Dorothy in 2005’s Wizzer Pizzer), and one was a transgender woman (Virgin Mary, a prostitute in “Babylon” that same year). The rest were born female. The secret to pulling it off as a man who’s over six feet with broad shoulders is to believe it through-and-through, Payne says.

“You can never comment on it in the performance,” Payne says. “Drawing attention to the fact that you’re a man playing a woman shatters it. The audience can no longer make an investment in the performance. And of course, that’s what makes it funny as hell.”

You may automatically think of Payne as Julia Sugarbaker (top photo) or Dorothy Zbornak in “Designing Women Live” and “Golden Girls Live.” More recently, he served up Paula Deen, Sarah Palin and Liza Minnelli for one-offs in the Big Gay Game Show. But that just scratches the surface. Female roles for Payne include, and are by no means limited to, the Succubus in “Vampire Lesbians of Sodom,” Latrelle in “Sordid Lives,” 11 women in “Greater Tuna” and “A Tuna Christmas,” the title role in “Auntie Mame,” Cher in “Santaland Diaries,” and Joan Crawford in his own play, “Christina, Darling.”

“I’ve played so many women that everybody else in the play believes are beautiful, and I’m a big lumbering goofy guy,” he says. “I never tried to trade on my looks. And when you’re having to serve up Dixie Carter realness, you better find a place in yourself that believes that’s true. You have to.”

Here’s what else he’s learned in a handy guide to turning a tall, large-framed 32-year-old man into a middle aged woman.

“If you don’t believe it, you have no right for anyone else to,” Payne says. “Believe who you are and ignore all evidence to the contrary. Every single time I play a female role, I have that moment in the mirror where I no longer find it funny.

“What I see in a lot of cross-gender performance is that they make that fact the joke, the whole joke. The only stakes are whether or when other characters are going to find out that you’re a man. That’s disguise comedy; it’s not what I do. What makes it hilarious is that the actor totally buys into it.”

Get it together, people

“I have to surround myself with people who can look at me with a straight face,” Payne says, then laughs. “I try not to look at pictures of myself in the role to help maintain the person I think I am. It requires a totally different kind of effort for the other actors who have to actually look at me. They have to support your vision and believe you can do it.”

“I don’t feel like I’m all the way there until my nails are painted,” the actor says. “Since it’s all about what you can see when you’re on stage – your legs, your heels, etc. – you do not want to look down and see man hands like a pair of hams.” Payne also tries to wear a woman’s watch and possibly a cocktail ring.

“Get a perfect manicure, and spend the money on a really kick ass pair of shoes,” he says. “It’s worth it. It affects your posture, your grace. You move lighter and with economy of movement. Because you have to. Or you’ll fall down.”

“In order for it to be hilarious, you have to find a serious, defensible answer for why this woman should be coming out of your body,” Payne says.

It’s about the person, not the woman. What drives her? What makes her tick? And it’s serious business.

“From ‘Golden Girls’ to ‘Designing Women’ to a really legit role like ‘Auntie Mame,’ that comes into play in a big way,” he continues. “The fact that the character is female has to almost be secondary. It’s that commitment that makes it hysterical.”

With all that seriousness and prep aside, Payne assures “The Divine Sister” is “hysterical and filthy. Like really dirty, and people are gonna love it.”

The play by Charles Busch (“Die, Mommie, Die,” “Psycho Beach Party,” “Vampire Lesbians of Sodom”) is a tribute to all the Hollywood films about nuns. Payne’s indomitable Mother Superior tries to cope with a young postulant, a sensitive schoolboy, a mysterious visititing nun and a former suitor intent on luring her away from her vows.