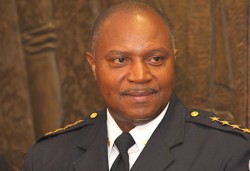 Atlanta police Chief George Turner again rejected calls to punish officers involved in the botched raid of the Eagle, saying an ongoing – and lingering – internal investigation into the matter would be compromised. Turner (photo) rejected the recommendations of the Atlanta Citizen Review Board, which has repeatedly called for Turner to punish officers and supervisors involved in the September 2009 raid. In January, the review board said supervisors in the raid should be punished. That followed their calls last year that officers involved in the raid each receive three-day suspension and a damning study that raised issues with the raid, including its planning and execution. The review board submitted their recommendations to Turner on Jan. 20; he rejected them five days later, but his response was just recently posted to the board’s website. On Feb. 11, Turner also brushed off calls from his own LGBT advisory board to follow the recommendations of the ACRB. “At this time, the Office of Professional Standards has not concluded its investigation into the allegations surrounding the Eagle File; as further investigative requirements arose as a result of civil litigation that stemmed therefrom. Thus, in an effort to be in compliance with the City Ordinance [Sec. 2-2211 (o)], I am obligated at this time to Reject your recommendation as it is imperative that the department afford our employees their due process. Once the Office of Professional Standards has completed its investigation, I will reconsider the recommendation of your board,” Turner wrote in his response to the review board. The $1.025 million settlement in the federal lawsuit over the Eagle raid, approved in early December, calls on the police department to conduct “a thorough and meaningful investigation” into the conduct of the officers involved in the Eagle raid within six months. But prior to the lawsuit settlement, an internal investigation into the raid was never completed, some 15 months after the incident.