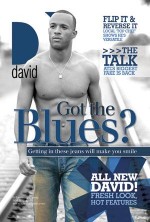 The new look is encouraging though it arrives at a tough time for the magazine. The page count, like most other publications, has dropped considerably in the last few months, its parent company is in federal receivership (tantamount to bankruptcy) and it’s facing new competition.

But first, the redesign. It’s the denim issue that also includes a full fashion spread with plenty of eye candy. New features include an expanded Datebook and a column for foodies and another offering health care tips. There’s also the pub’s bread and butter Bitch Session (our fav), Need Wood and plenty of nightlife photos. Pick up a copy and check it out.

Let’s hope the expanded page count sticks and the new look helps David survive the recession and the financial woes of its daddy. But even without that double whammy, David faces new competition from Pocket Rocket and Gaydar Atlanta. The gay nightlife scene here hasn’t seen competition like this since the early days of David in the late ’90s when it went up against Etc. and the nightlife coverage of Southern Voice.

Gaydar Atlanta debuted on Feb. 1, offering an every-other-week slick publication similar in size, format and scope as David. It offers a calendar, bar map, photos and other regular features in addition to a heavy dose of bar and club ads.

Also new on the racks is the monthly Pocket Rocket Guide, which bills itself as “Atlanta’s pocket-sized gay guide.” It hits the streets earlier this month in a black and white format that easily slips into your pocket. Inside are ads, photos and a promise of “no editorial, no clutter.”

Enjoy the choices as the gay nightlife turf war shake out.