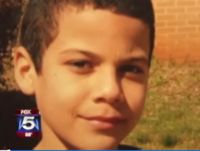 VIGIL: A prayer vigil is set to remember Jaheem Herrera (photo), the 11-year-old DeKalb student who committed suicide earlier this month after facing anti-taunts and bullying from classmates. The event is set for First Christian Church of Decatur on West Ponce de Leon Avenue. Georgia Equality, the Faith and Community Alliance and other gay and gay-friendly organizations are involved. 6 p.m.

GET SOCIAL: Have some cocktails, conversation and connections with Social Tuesdays, which moves to Vickery’s in Midtown this week. Cocktails start at 7 p.m.

PLAY BALL: Stop in and scope out the Hotlanta Volleyball Association. The gay league continues its advanced open play, which includes members and non-members playing in random teams. Action begins at 7:30 p.m. at Agnes Scott College.

TIPSY TUESDAYS: My ATL Productions is behind Tipsy Tuesdays at Club Chaparral on Buford Highway. The evening includes drink specials and giveaways. 10 p.m. with a talent show at 11:30 p.m.